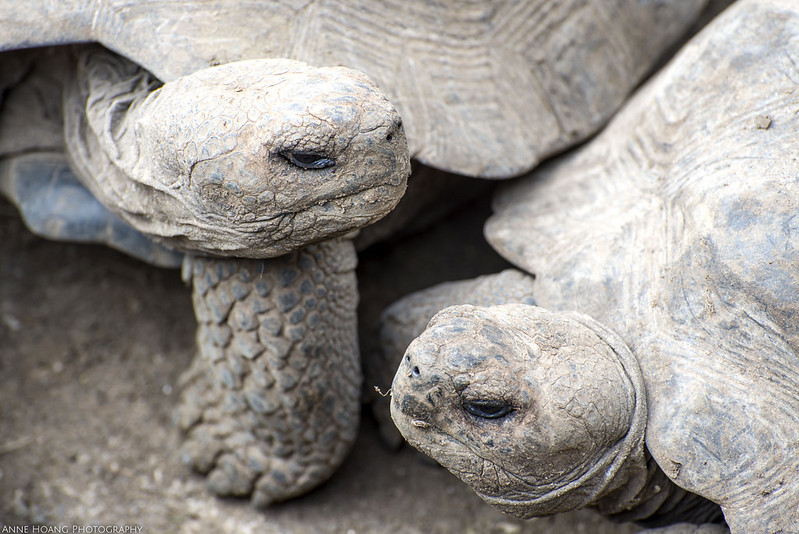 Our journey to the Galapagos Islands was a bombardment of wildlife and education. This was my first time photographing wildlife and what a place to do it – you can get right up close and personal, although of course a zoom lens helps.

The Galapagos Islands are famous for their endemic species, which means that the species are unique to Galapagos and are not found anywhere else in the world. Most famously, the giant Galapagos tortoise, which was one of the inspirations behind Charles Darwin’s The Origin of Species. Darwin noted that the tortoises on each island evolved over time to better adapt to their environment. 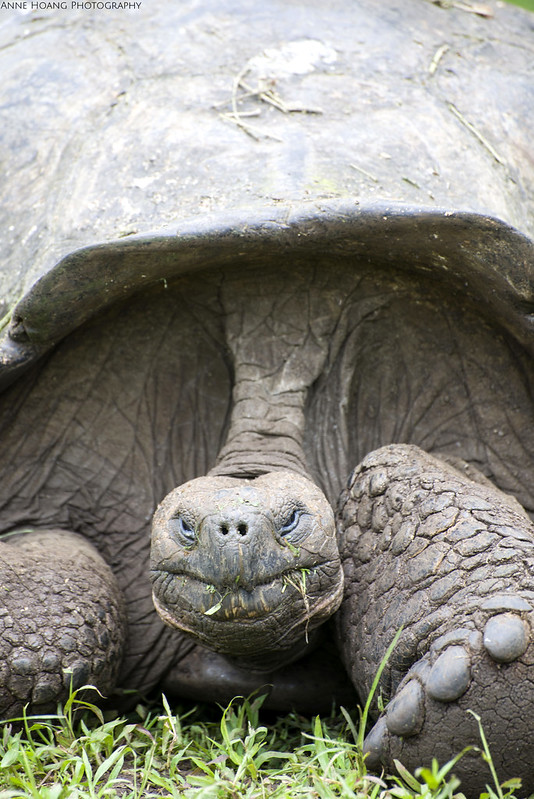 This Giant Galapagos tortoise was feeding on some grass before I took this photo. If the tortoises saw us approaching, it would withdraw it’s head and legs with a deep hissing sound. If you want a photo with a tortoise, you should walk slowly and silently behind it, this way they can’t hear or see you approaching and won’t withdraw itself into it’s shell. 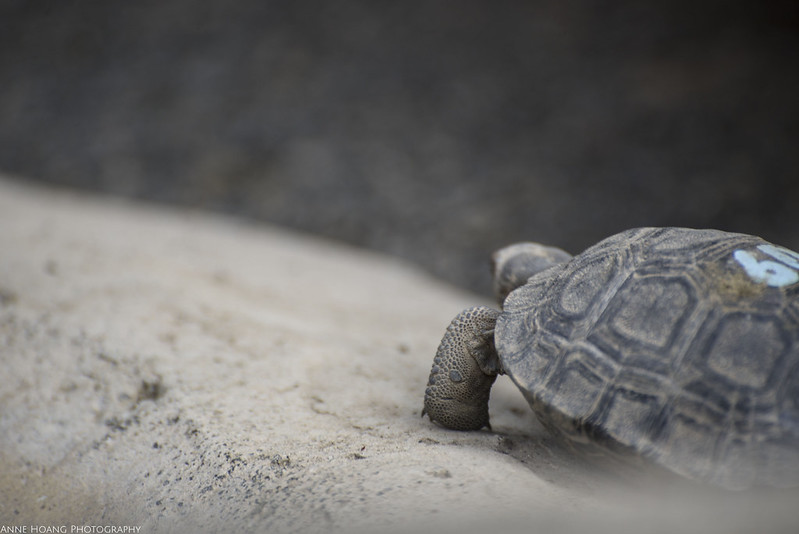 This image of a tortoise was taken at one of the breeding centers. I like that this photo looks like the tortoise is racing, with a number on the back of it’s shell. 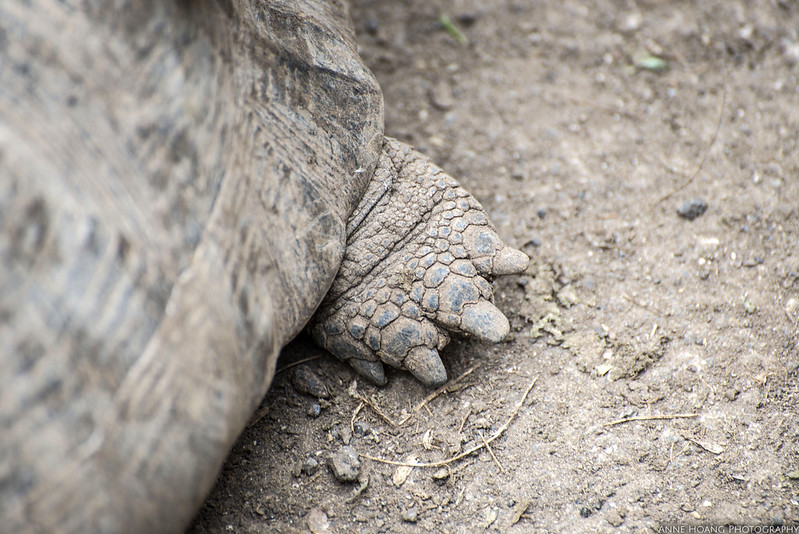 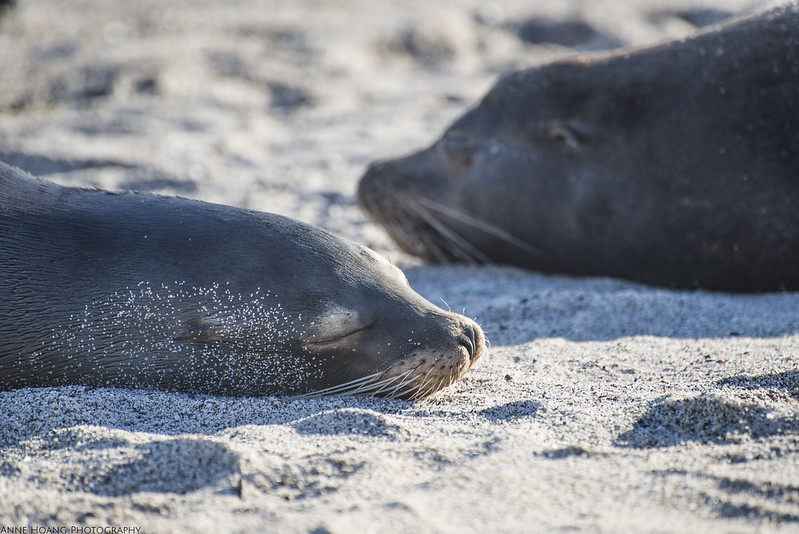 Sea lions are found everywhere on the islands, often napping on the sandy beaches. However, some of the best action that I saw, such as a sea lion hunting a penguin, was actually underwater while snorkeling in the Galapagos Islands. 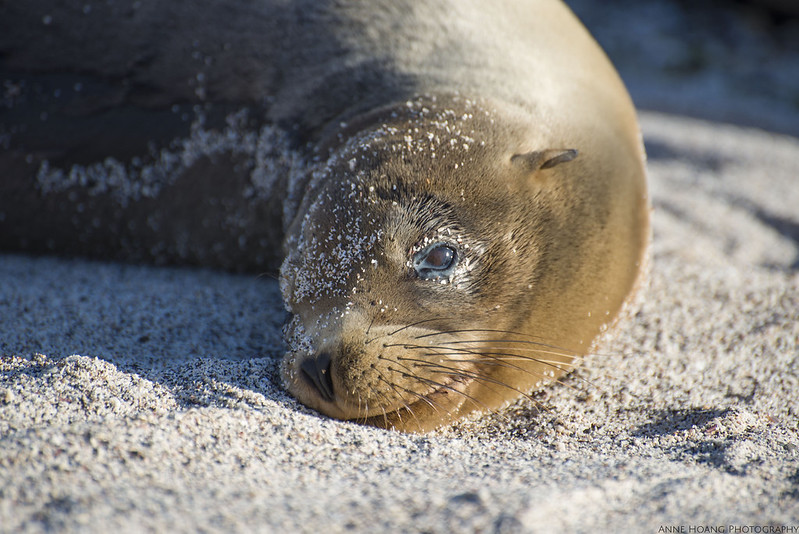 Wildlife photography is a waiting game. It took a while to capture this photo of a Galapagos sea lion with its eyes open. The milky white substance is sea water and they are able to excrete it from their eyes. 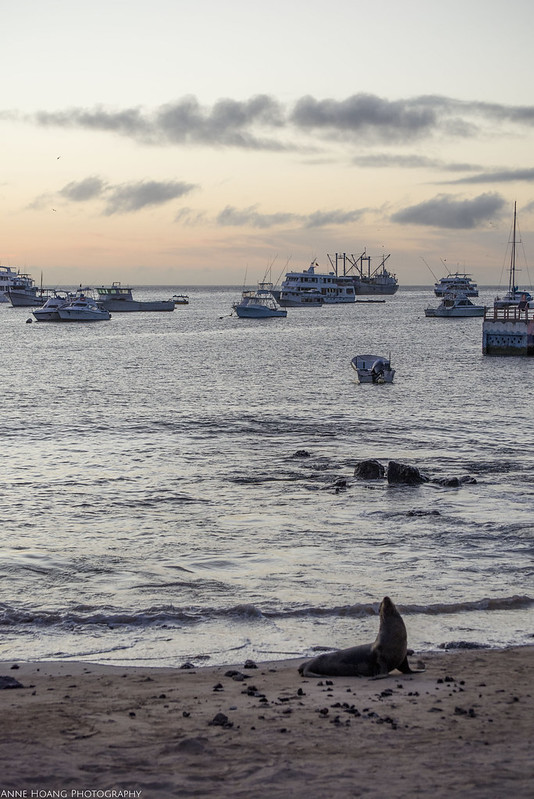 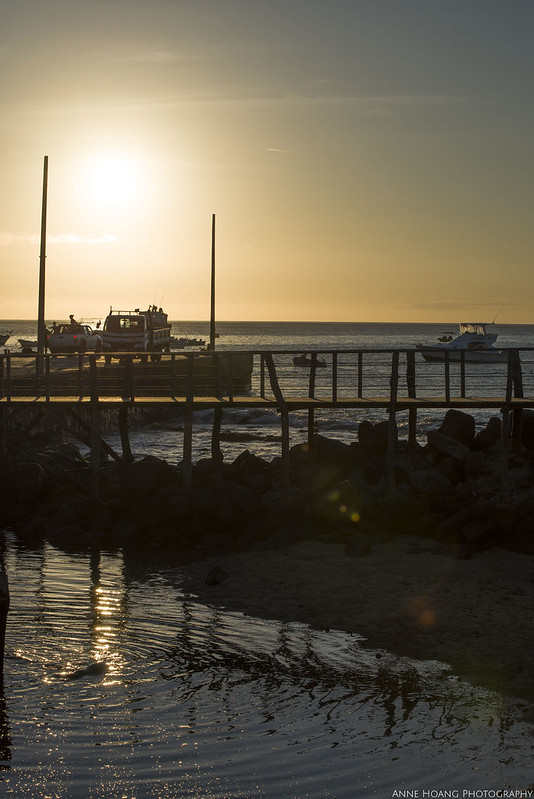 Sunset at Isla San Cristobal. Ripples in the water formed from a sea lion swimming in the water. 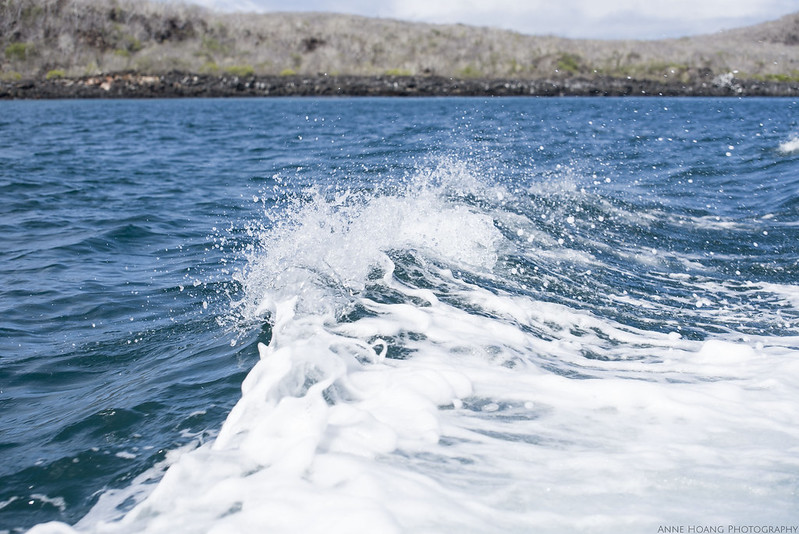 We traveled to each island by boat and experienced extremely choppy water. Many people fell ill to seasickness. 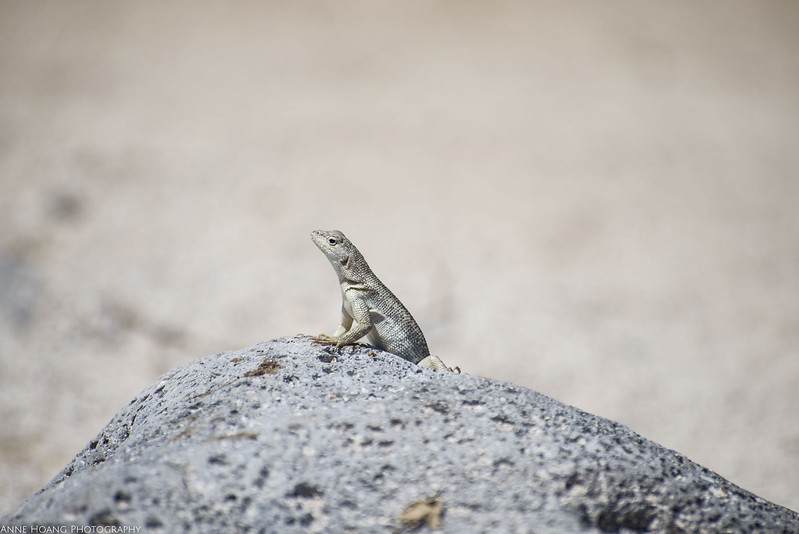 A tiny lizard perched on a rock. 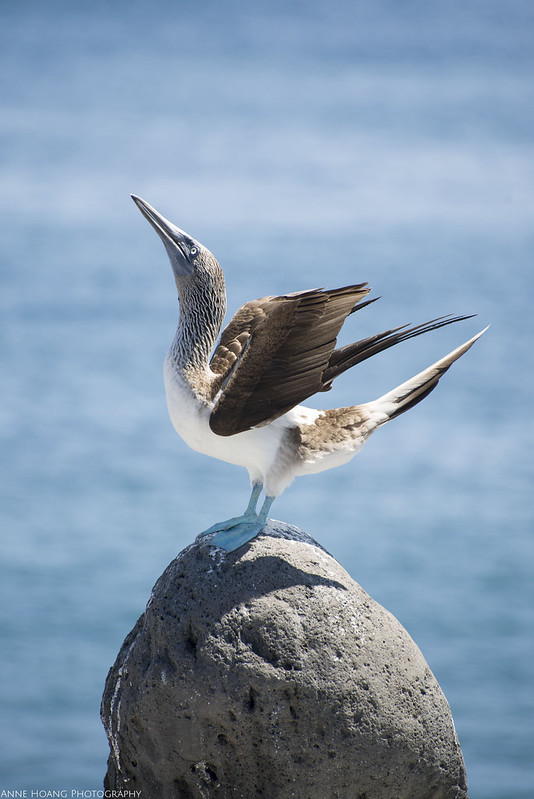 We witnessed two blue footed boobys participating in a mating ritual called sky-pointing where they would make a whistling noise and lift their wings/head towards the sky. The bluer the feet, the more attractive the male is to the female.

A baby iguana, a top its mother’s back. Their dark grey colouring helps them to absorb sunlight.

We visited an island filled with land iguanas and this was the rocky landscape. 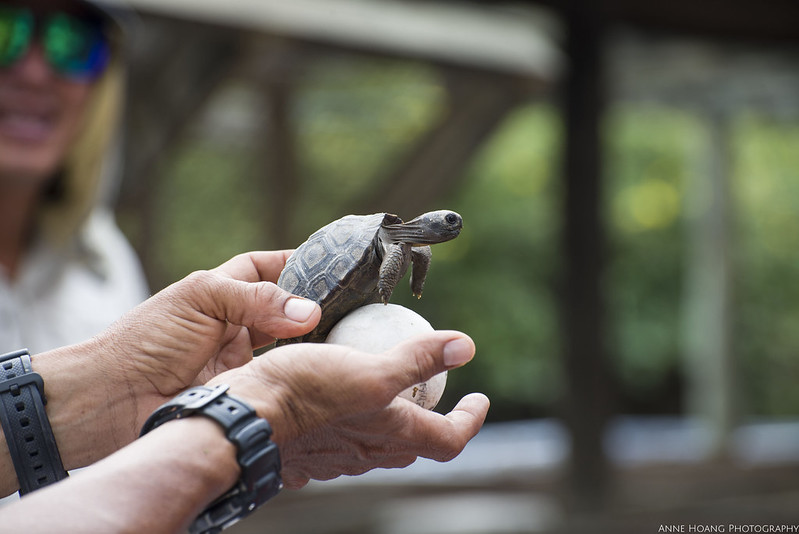 A baby tortoise and an unhatched egg at the breeding center. 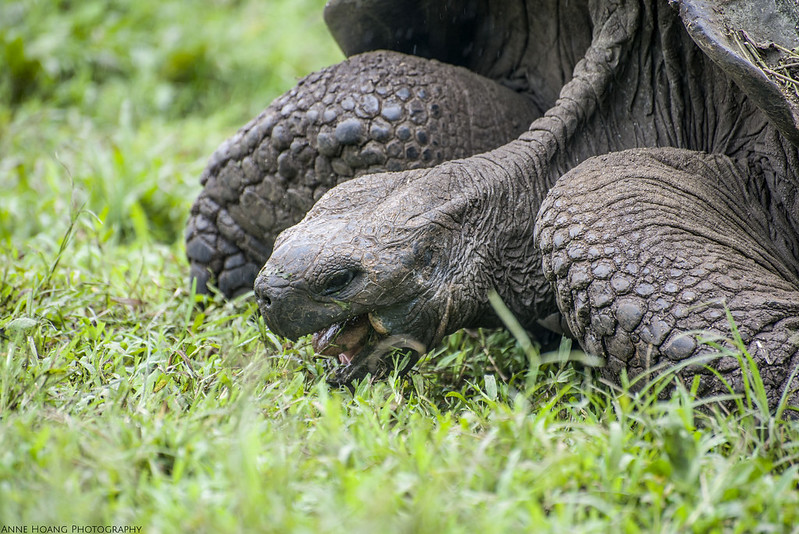 A Galapagos tortoise in the wild, chowing down on some grass. 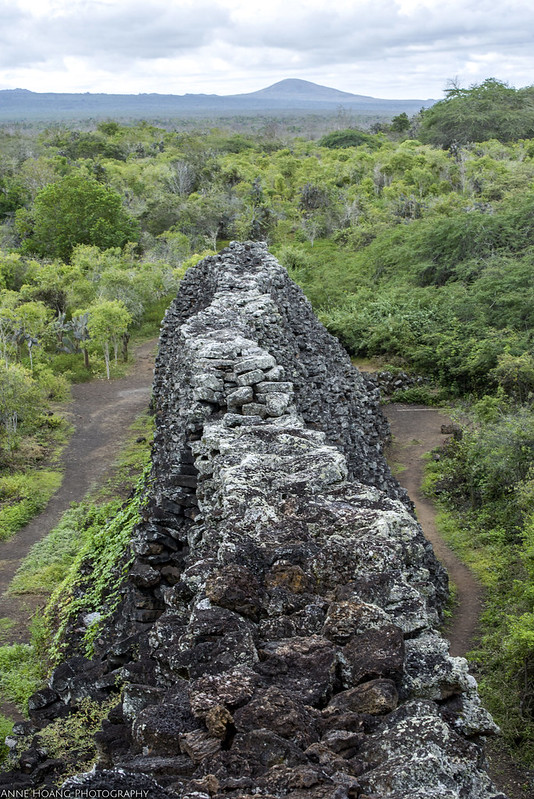 This is the Wall of Tears, on Isabela Island. It was said that the guards told the prisoners to build this stone wall to keep them busy. Many prisoners died from dehydration and starvation and some bodies were buried inside this wall. 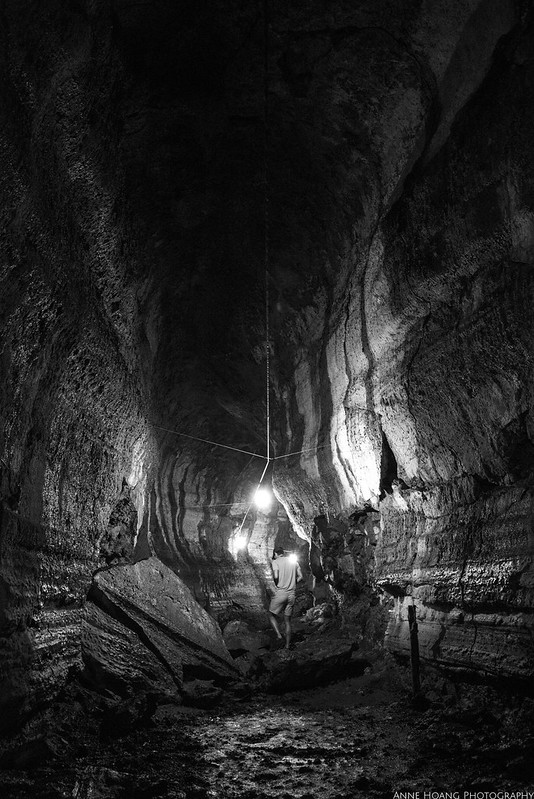 The Galapagos Islands are a wildlife photographer’s paradise. Just be sure to bring a zoom lens, I specifically bought a 70-300mm lens for this trip. I also brought along my wide angle lens (17-35mm) although I didn’t really use it much as I was focused on the wildlife most of the time.

2 thoughts on “Wildlife Photography at the Galapagos Islands”