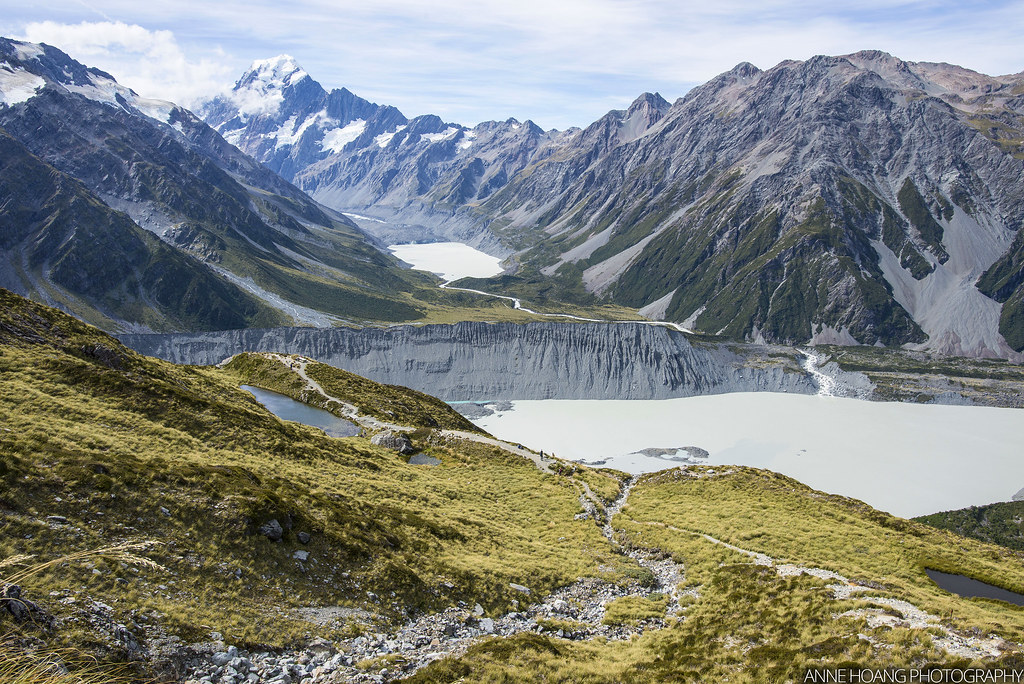 Mueller Hut route at Mt Cook national park is both hard and epic. It was one of the more challenging day walks I’ve competed and if you’re looking for adventure, this is a good one.

The day was just beginning as we pulled up into a car park filled with campers sipping hot tea, adorned in puffy jackets and woollen beanies. I shivered as I got out of the car, and was thankful that Jackson had badgered me about bringing a fleece jumper.

After chatting with the ranger and asking for directions, we began on a track perpendicular to the car park. Early on we reached a fork in the trail. Right stated Kea Point, a short 15 minutes to a scenic lookout, and the left sign scribed Sealy Tarns and Mueller Hut. We veered left.

It was not long before we reach the stairs, aka the worst thing in the world. Many many stairs. Continuous uphill. Switchback after switchback. What a pain. 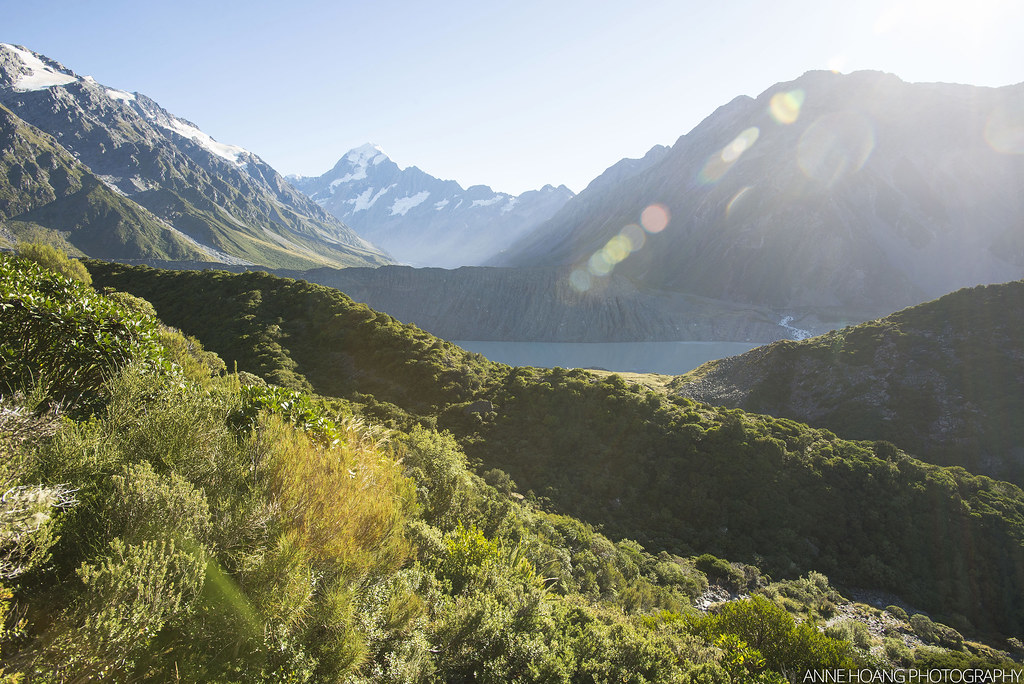 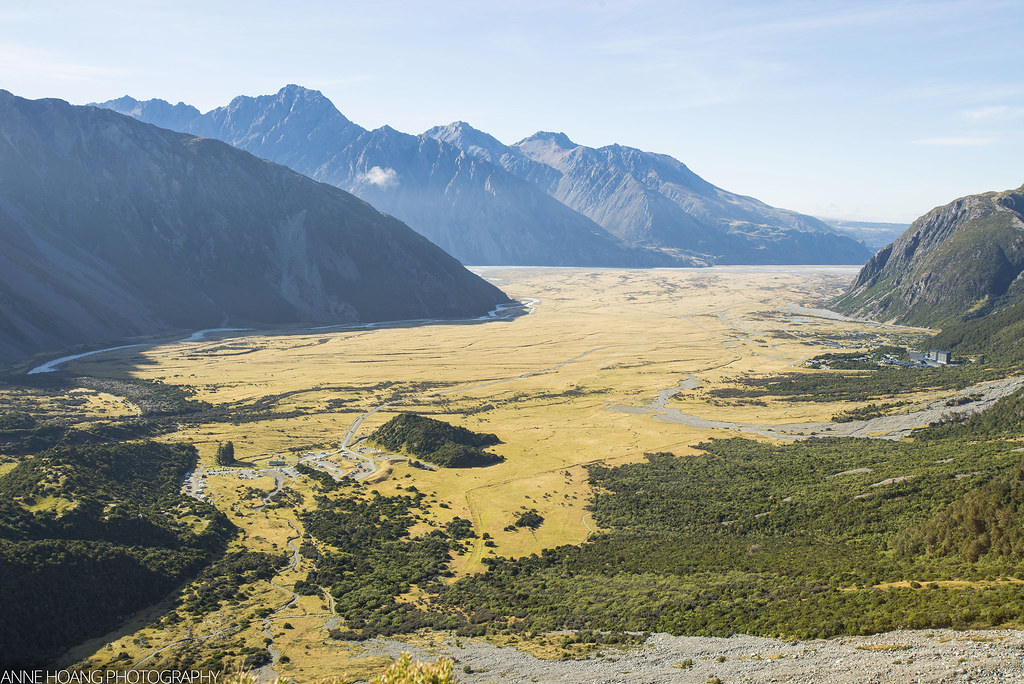 As we journeyed uphill, the views of the lake and glacier wowed us. We peered down from the lookout and saw tiny dots of cars from whence we started.

When we arrived at Sealy Tarns, the half way mark, we paused for a short rest and snacks. A local kiwi woman approached us with a smile, she had greying wavy hair and wore a wide brimmed hat slung over her shoulders. She was here with a Canterbury walking group and mentioned in passing that she was 70 years old. I find it incredibly humbling to meet older folk in the great outdoors, especially on these harder walks. 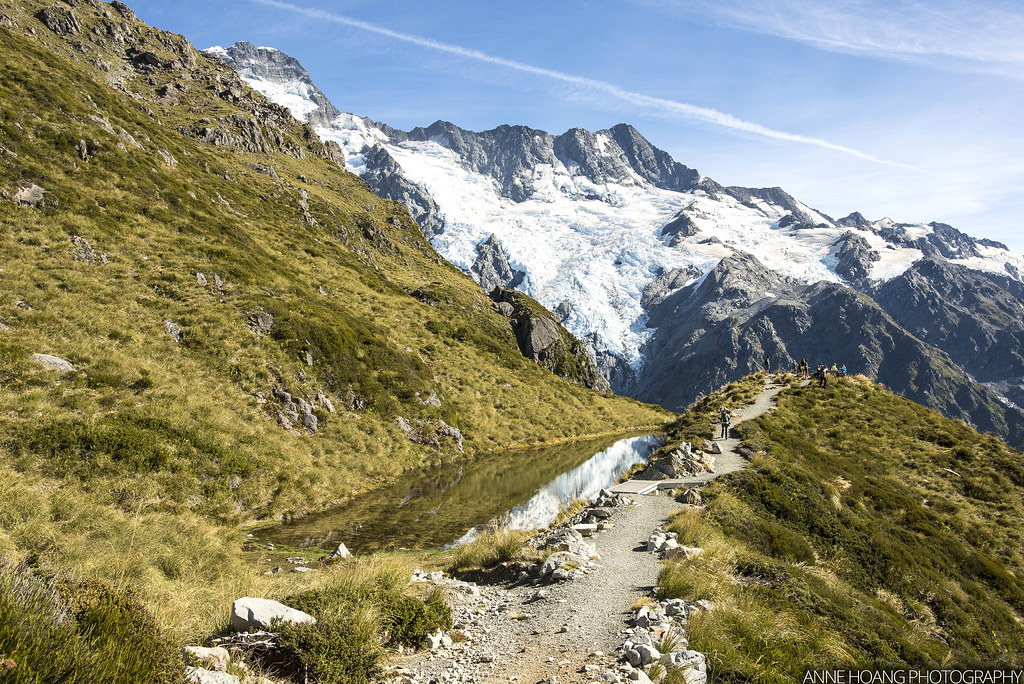 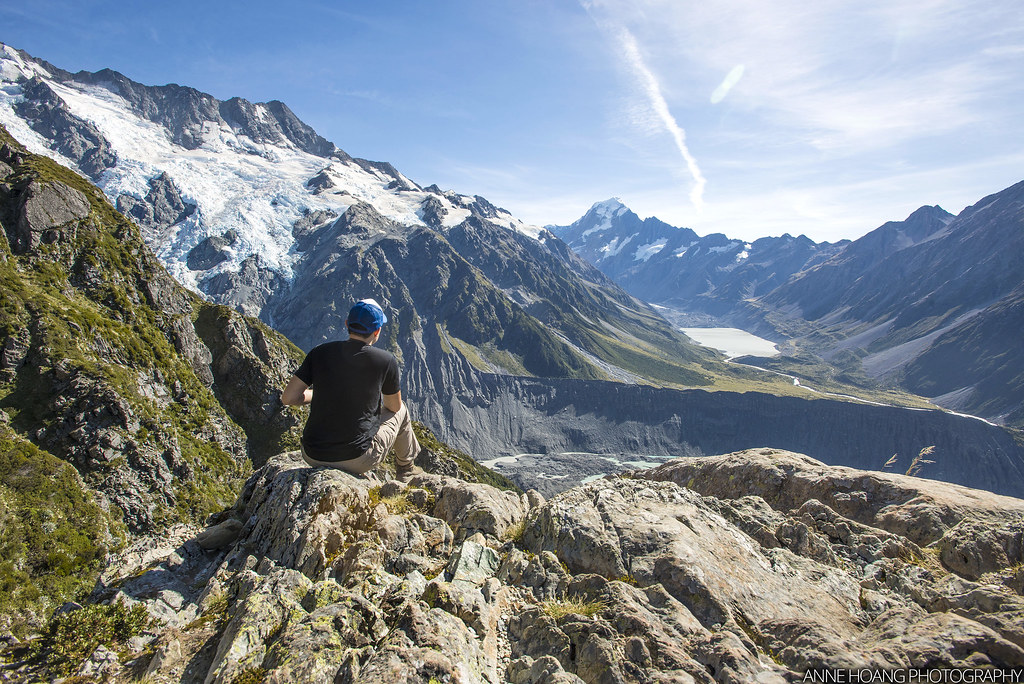 The path from Sealy Tarns to Muller Hut was difficult, albeit interesting. It’s not only steep uphill but also on tough terrain. After multiple rocky switchbacks and boulder hopping, we reached a sharp section, trekking at a 45 degree angle up the mountain with no visible path and the ground covered in scree. We were literally climbing a mountain.

“I’m tired” I told Jackson in a dejected tone. I was hitting a wall and didn’t want to continue. I still had energy but the mental strain of non-stop uphill climbing, with no visible end in sight wore on my brain. It reminded me of the few times that I’ve been jogging, an activity I loathe, where I curse myself every time and wonder why I even began in the first place. Why do I put myself through such torture? Jackson asked “what do you want to do?” I shrugged my shoulders and replied “nothing” and soldiered on. I clung on to the hope that we’d soon be there.

When we reached the saddle, we were greeted by claps and congratulations from fellow hikers. I asked “are we here?”  No, another 20-30 minutes to Mueller hut was the answer. Ughhhhhhhhh. The wind was in full force at the saddle and our windbreakers were worth the extra weight on our backs. We took a quick break to admire the glacier in full view. It was immersive and grand. 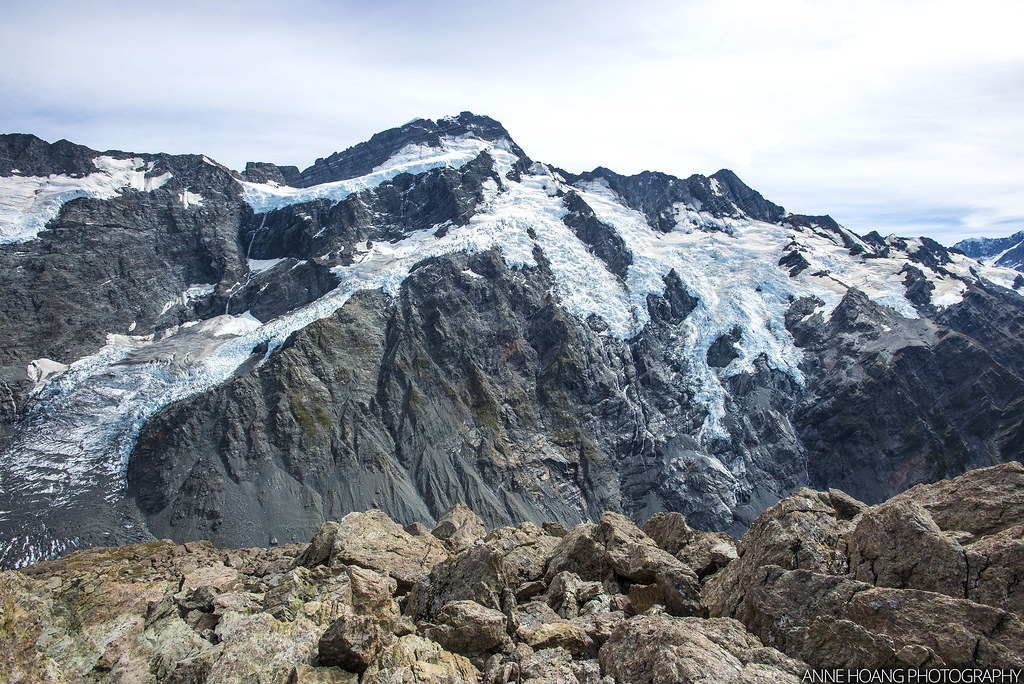 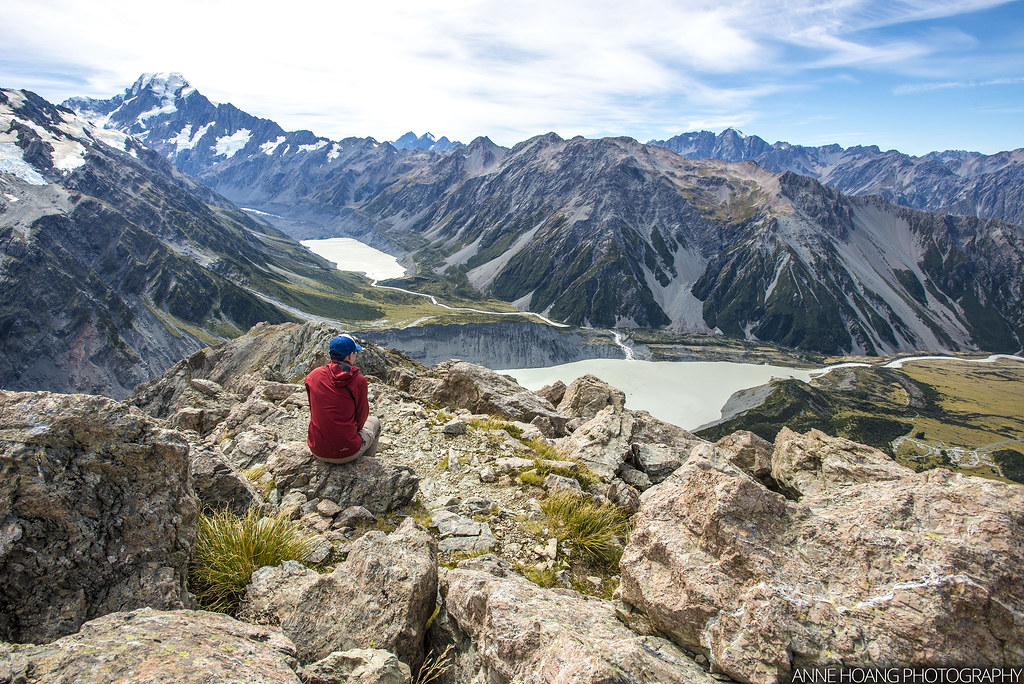 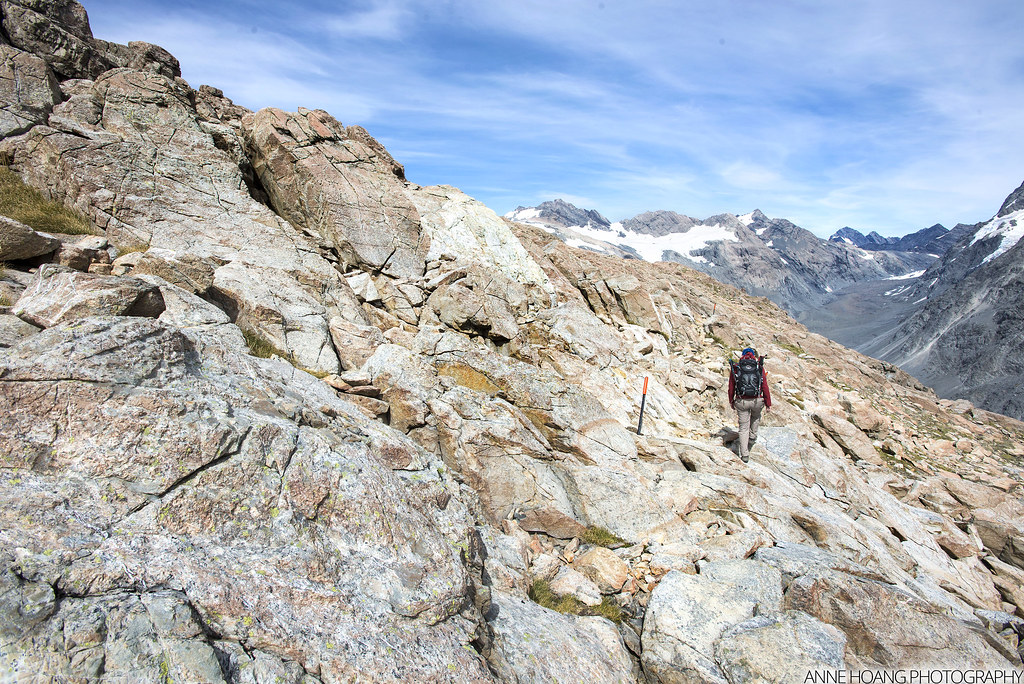 Although the path from the saddle to Mueller Hut was flatter, it was still a task navigating through the rocky terrain. 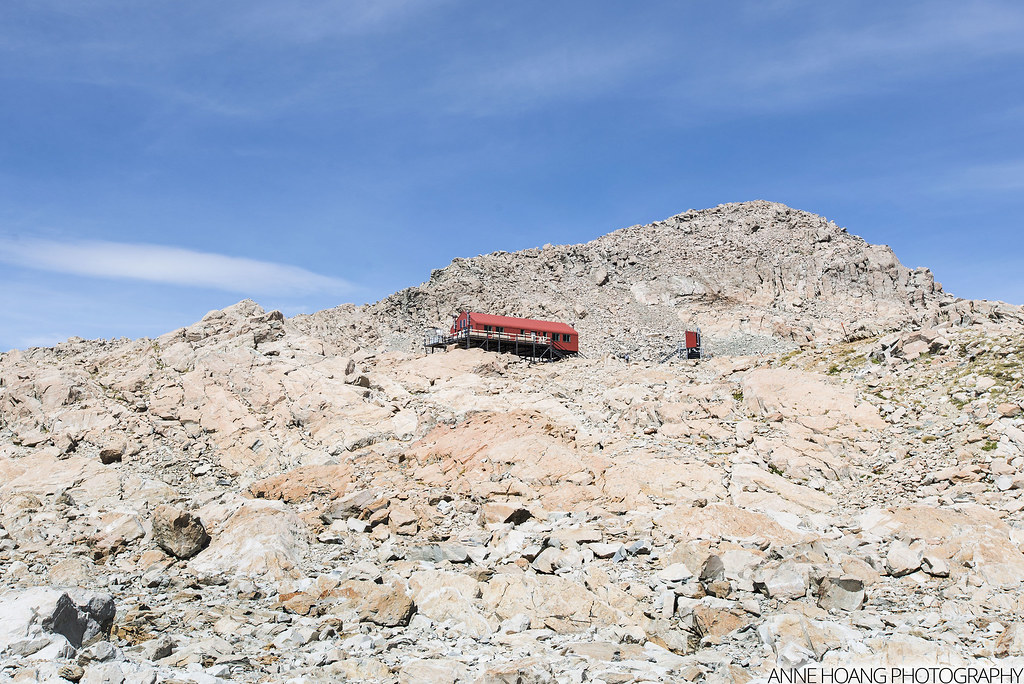 We reached Mueller Hut around lunch time and slumped on the benches in exhaustion. The wind was howling loudly outside and every now and then the doors would fly open from the gusts of wind.

After lunch we made our way back down the mountain. As we passed hikers struggling uphill I could empathise with their pain and gave words of encouragement. A lone hiker approached “am I almost there?” she asked meekly. She was just starting the 45 degree incline of hell and I replied “almost, another 30mins to the Saddle” She sighed and I recognised that look on her face; the fatigue, regret and hopelessness. I informed her that walking all the way to Mueller hut was not necessary and to just come down after the saddle. If you’re short on time (or can’t be bothered), I suggest skipping Mueller Hut, the views are mostly just rock (in summer time). 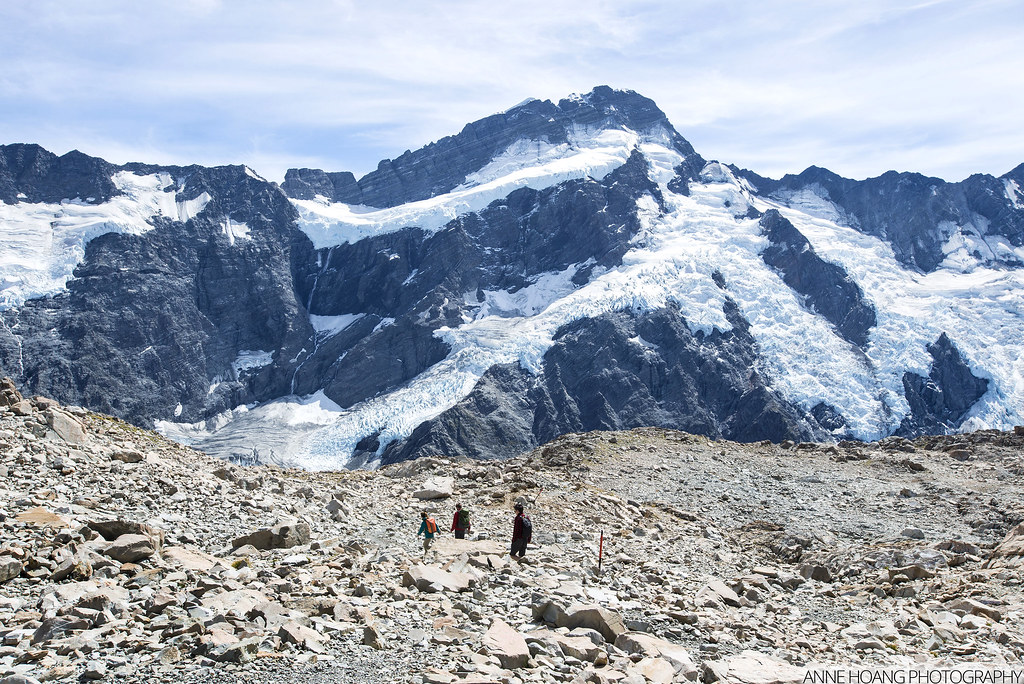 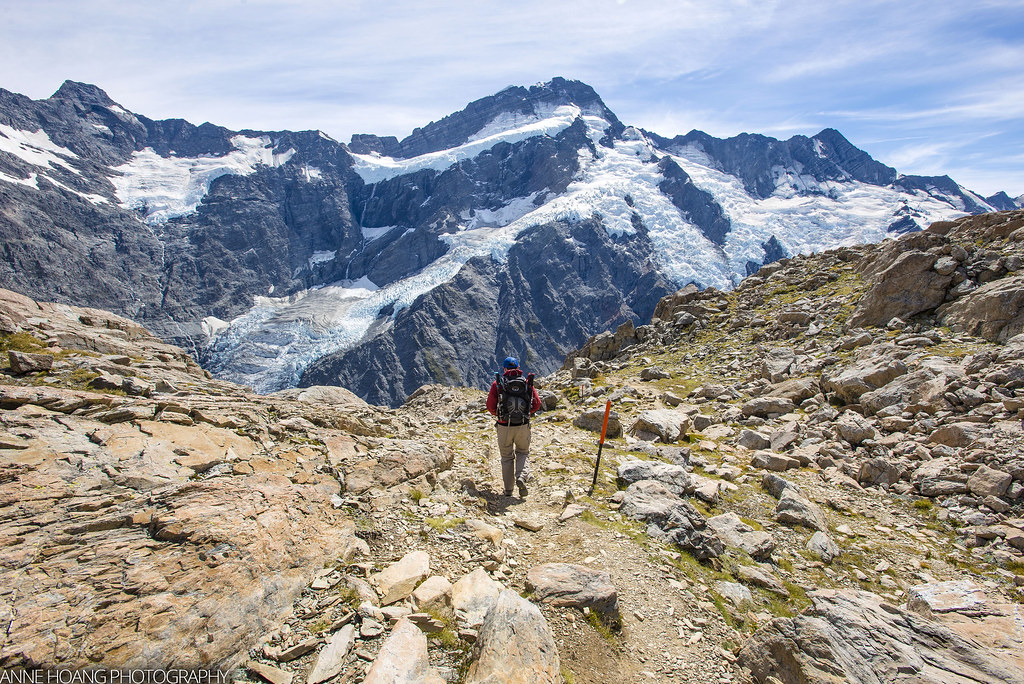 Our knees took a beating on the way down, although the hiking poles definitely helped. We completed Mueller Hut track utterly shattered, but happy. 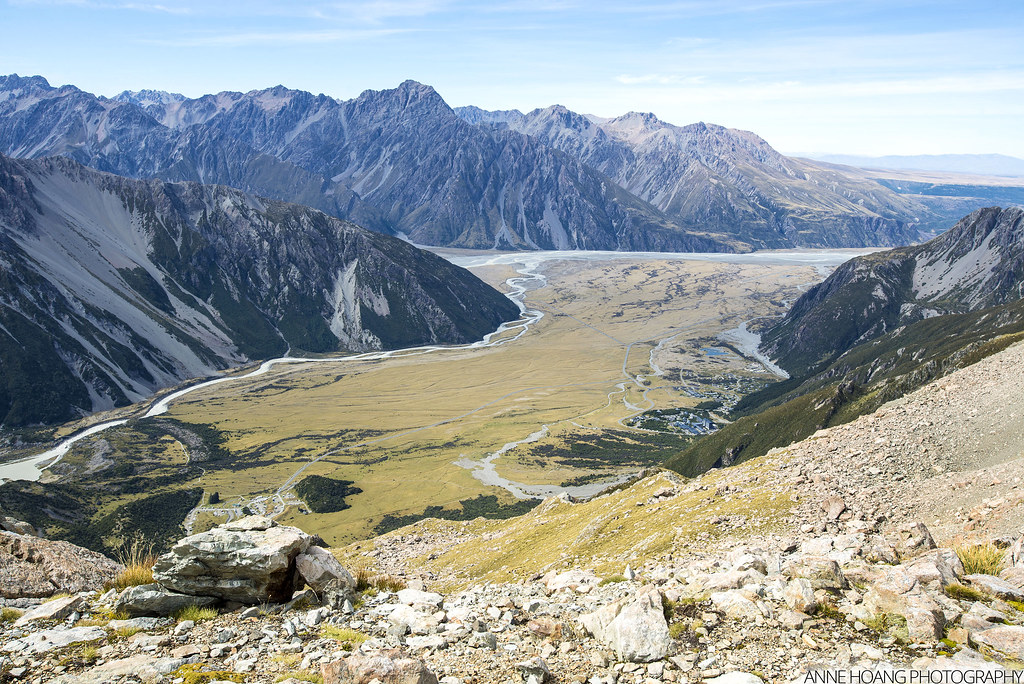 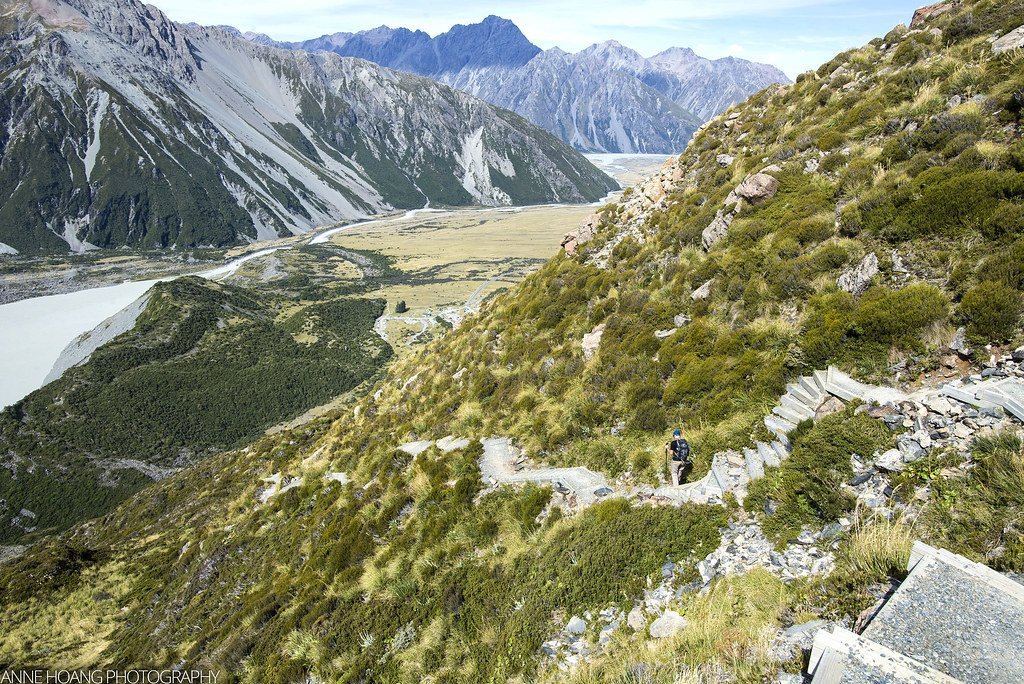 It’s always rewarding when you reach new limits and find that little bit of extra energy and willpower to make it to the top. Hiking is one of those activities where you can easily do it alone, because in reality it’s you vs. the mountain and no one else. It won’t listen to your excuses. It’s just there and you’re a raw and exposed version of yourself. Like Sir Edmund Hillary said, the first person to summit Mt Everest, “it is not the mountain we conquer but ourselves”.