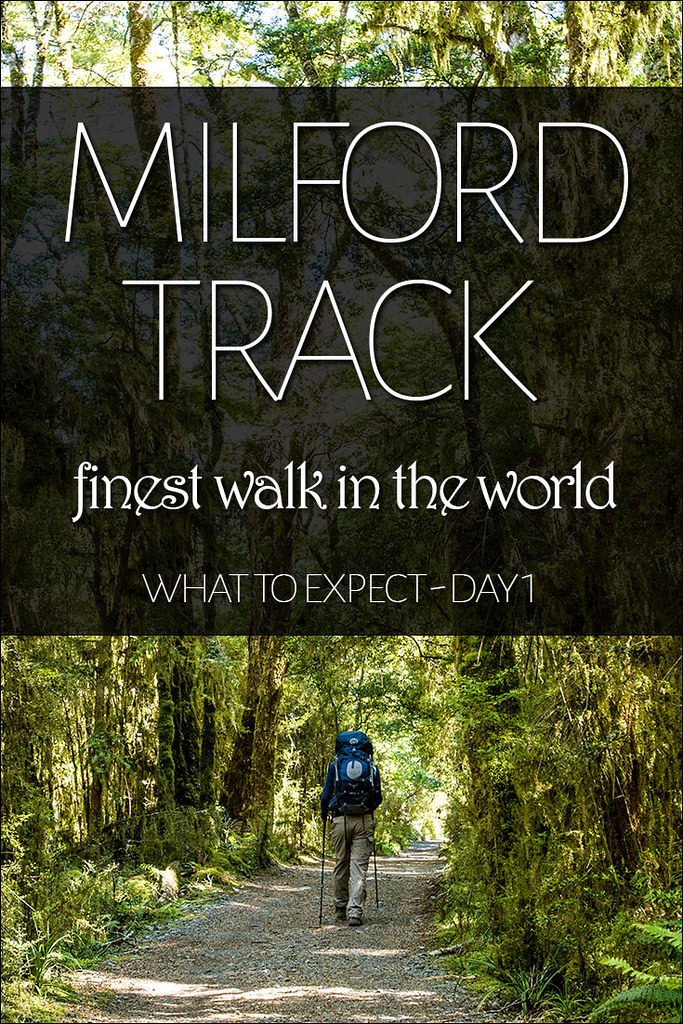 Milford Track is one of the nine great walks in New Zealand and touted by many as one of the most beautiful walks in the world. It is a 4 day tramp (Kiwi language for hike) through green forests, still lakes and beautiful alpine scenery.

We had an early morning start from Queenstown, catching the 6:55am bus to Te Anau Visitor Centre to pick up our tickets booked at the Department of Conservation (DOC), which includes ticket stubs for the ferry, hut accommodation and bus ride. We caught the 10:30am ferry at Te Anau Downs to the starting point at Glade Wharf. 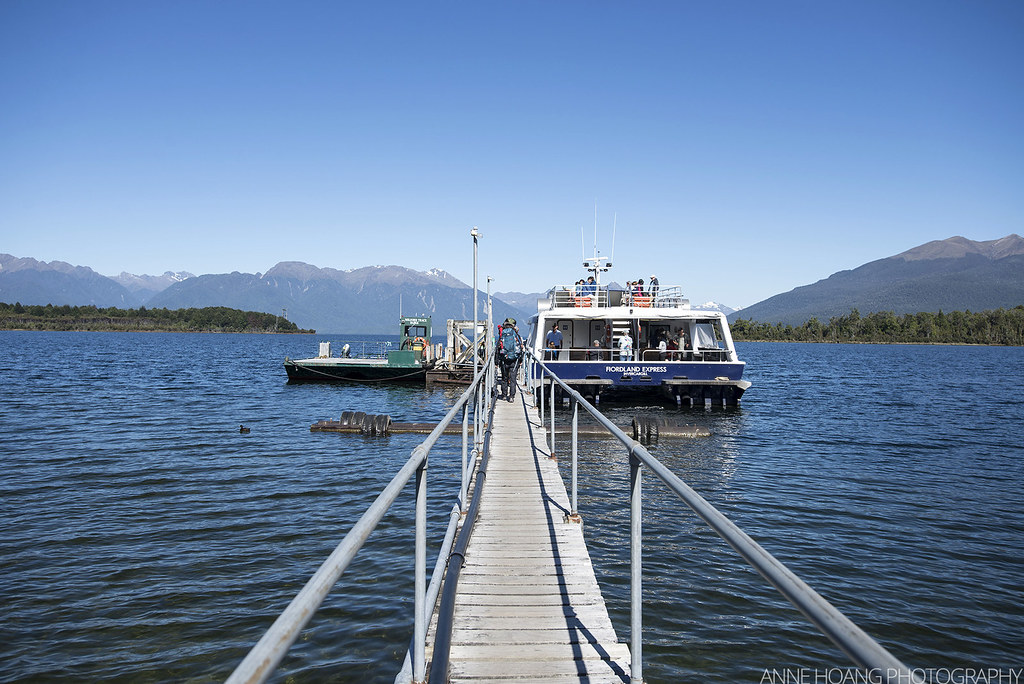 Walking to our ferry, taken at Te Anau Downs

Excitement ensued as we got off the ferry at Glade Wharf. We were instructed to dip our shoes in soapy buckets of water. This was to prevent the spread of Didymosphenia geminata, commonly referred to as rock snot. Rock snot, which pretty much looks like the name describes, poses a threat to insects, and as a consequence the food source of fish.

As we prepared to begin our 5km trek for the day, sand-flies were already swarming us. Strong insect repellent, ones that contain DEET, is definitely recommended for Milford Track. 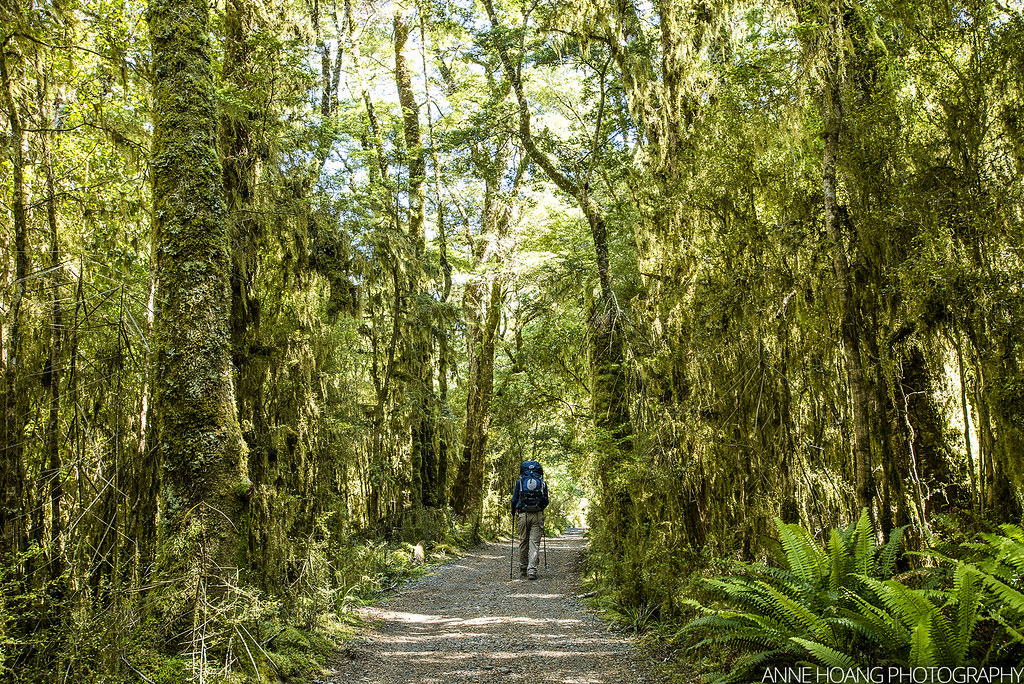 The first day is an easy 1.5hr walk to Clinton Hut with flat ground through beech forest.

We arrive before lunch time and grab some bunk beds. It becomes a common theme to try to get to the hut before the majority of the group so that we have first pick of the beds (there are a maximum of 40 independent hikers that start the Milford track each day, and during the high season it is usually fully booked out).

At 4:30pm the ranger, that had an uncanny resemblance to Gandolf the Grey, came to visit and took us on a nature walk around the surrounding area. He pointed out interesting flora, such as a carnivorous plant that ate sand flies (awesome!), leaves that could be used as a pepper seasoning alternative, lichen that have been around since the prehistoric age and much more.

After the walk we prepared dinner, an unsatisfying dehydrated meal of nasi goreng. At 8pm the ranger came by the common area and talked about what to expect over the next few days and also information about local flora and fauna. After a few hands at cards, we settled in for the night, in anticipation for the next day. 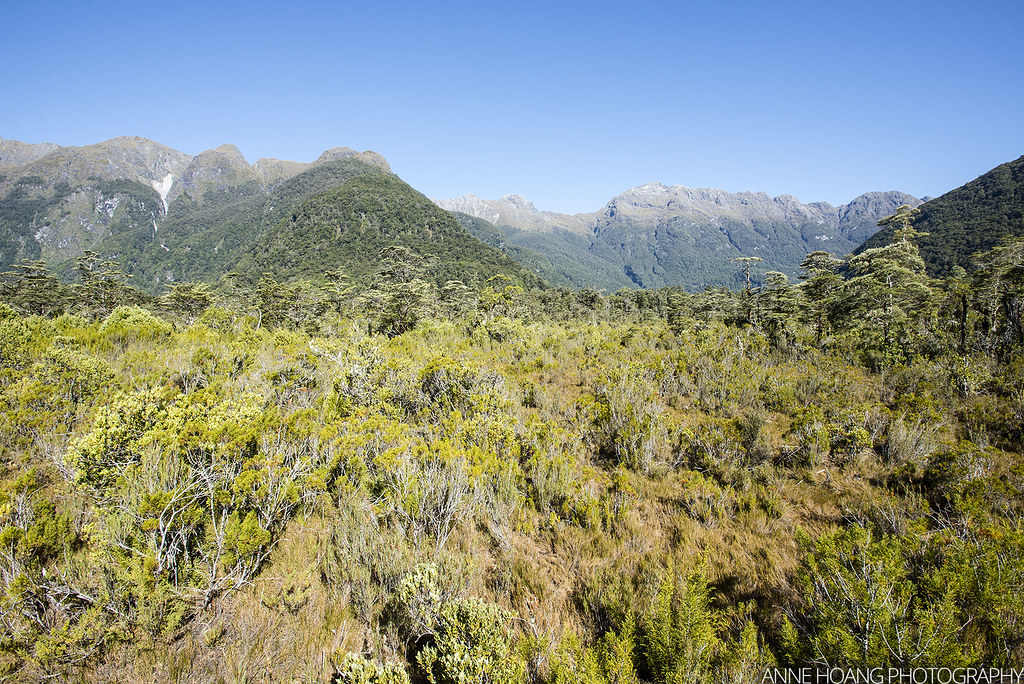 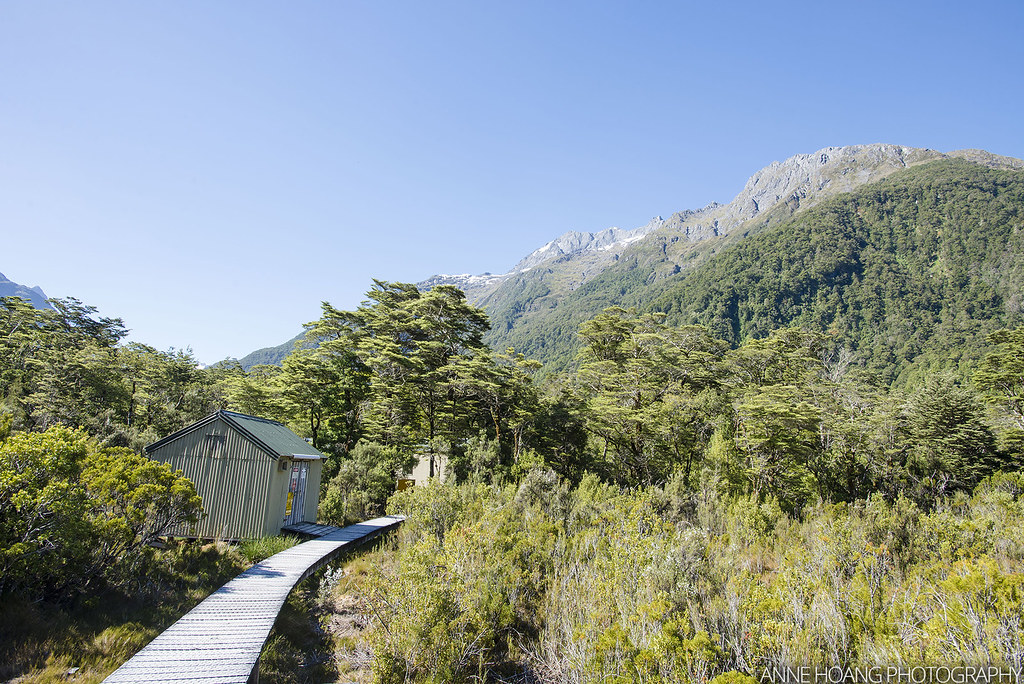 I couldn’t really find much information about the huts online, so thought this may help future Milford Track trampers. 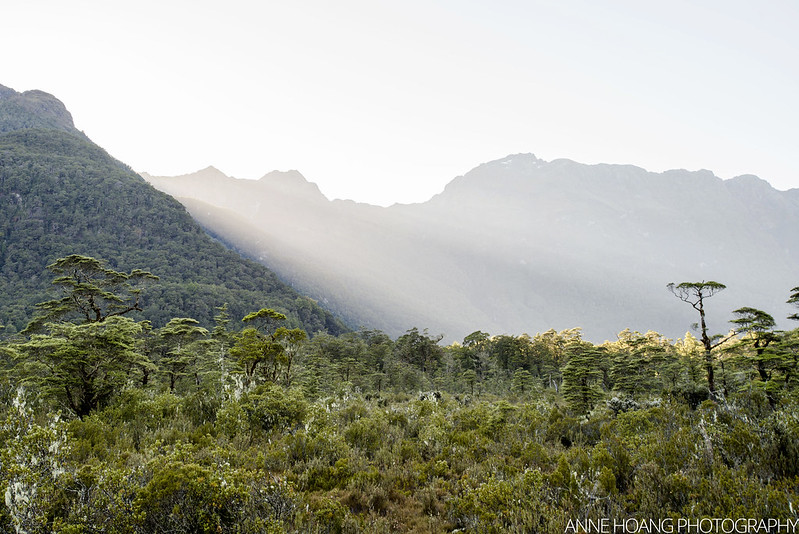 The early morning December air was crisp but we warmed up soon enough. The first half of the day’s walk was mostly through shaded forest alongside Clinton River. The purity and clarity of the water was astounding. Rangers would later tell us that you can drink from any of the running steams. 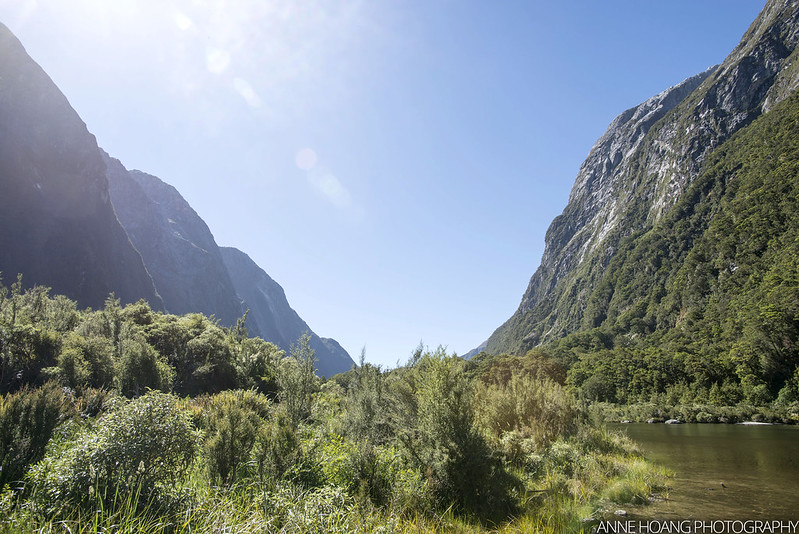 As we progressed through the forest, the view would open up to a wide valley with mountains on either side. We took a side trip to Hidden Lake where saw, what we assumed to be, the endangered blue ducks swimming, the ranger made a point last night that that was one of the areas to spot them. 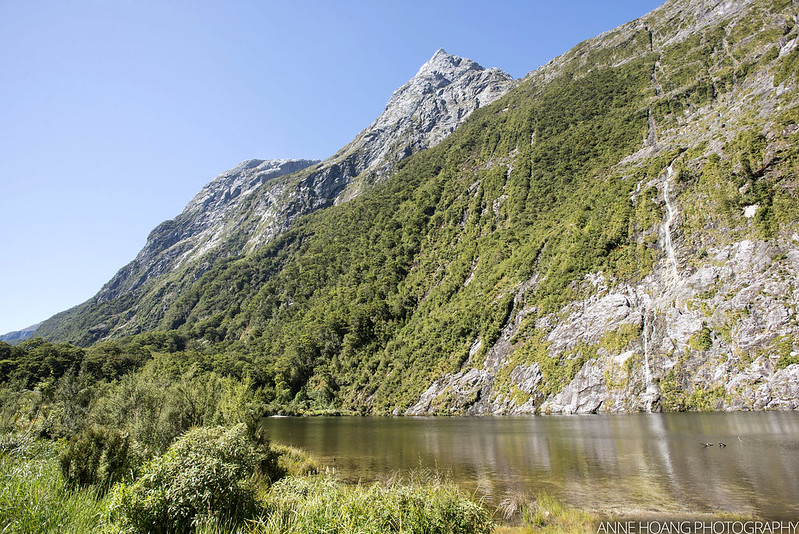 We hopped from rock to rock through avalanche areas and soon after we arrived at a beautiful meadow filled with pretty yellow flowers. 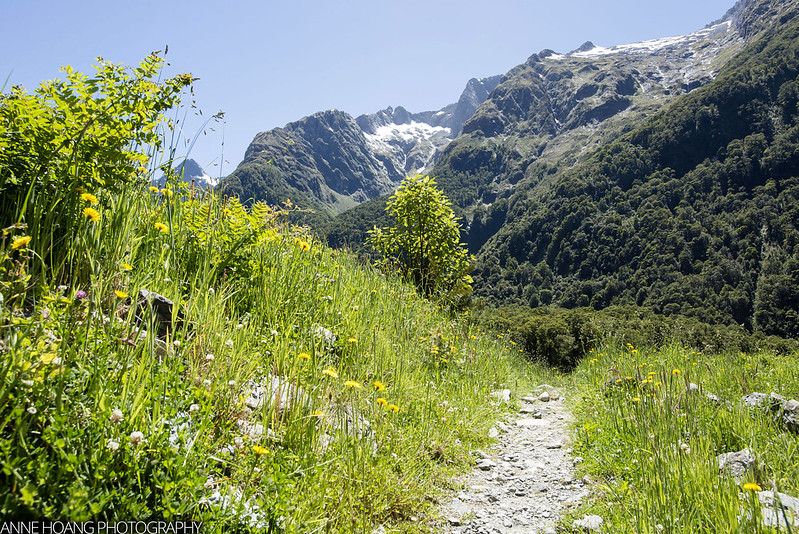 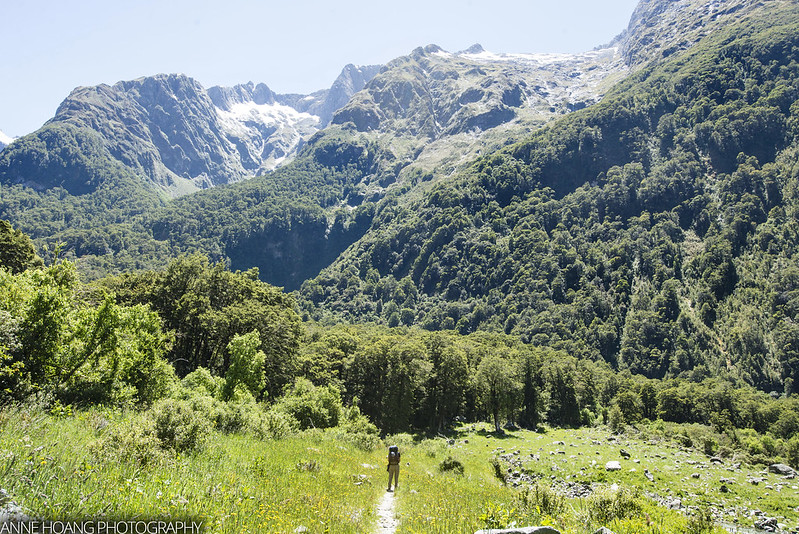 It was an uphill climb to get to Mintaro hut with many stairs (that seemed never-ending) through green forest.

At Mintaro Hut you can spot Kea parrots that are endangered and unique to New Zealand. They are considered one of the most intelligent birds. Kea will often put on a show to distract you while its friends raid your pack!

We had to hang our hiking boots and poles on hooks at Mintaro as Kea have been known to steal and or destroy equipment that have been left outside. Our ranger noted that the curious teenage Kea visit Mintaro hut at around 8pm and also in the early morning.

At around 6pm we gathered around the communal area for the ranger briefing. She talked about what to expect the next day and general housekeeping information.

We all settled in early that night, in anticipation for the long journey ahead the next day.

Tips for the Milford Track