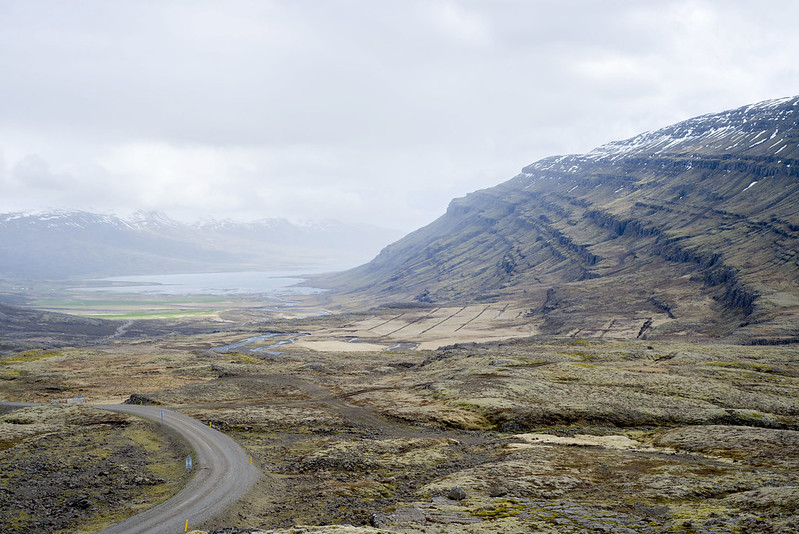 I looked in the passenger side mirror and the distant scenery caught my attention. My partner and I continually drove up the windy and steep road until we finally found an area where we could stop off. I walked around to stretch my legs and discovered that the land was covered in a spongy moss. It had springiness and I could almost bounce up and down. As I was enjoying the bounciness and looking out upon the vastness of the landscape, I wondered whether I was the first person to have ever stepped on this exact spot. It’s incredible how isolated and untouched Iceland is.

We returned to the land of fire and ice in mid 2013. I first fell in love with the country during a winter break in 2011. We travelled around the ‘Golden Circle’, which is a 300km loop from the capital Reykjavik to central Iceland and back. During the trip I also caught a glimpse of the elusive Northern Lights. Although it was an eventful holiday, it only left me wanting more.

This excursion would be different to the first. Our plan was to drive along the Ring Road, which is a route that circles around the entire Island. We only had four days to do this, which in hindsight wasn’t the greatest idea, but we were determined.

As we boarded the Icelandic Air flight to Reykjavik I could hear music from Icelandic musicians playing. Over the past few years I’ve had an affinity with Icelandic talent such as Sigur Ros, Leaves and Seabear. When I listen to their music I feel uplifted, hopeful and serene. Sometimes I imagine I’m there in the midst of Iceland. So as soon as I got on board and heard the music, I felt elated.

We picked up our rental car and drove out of Reykjavik. Traffic was non-existent and excitement filled the air as we put on our road trip mix tape. It felt great to be on the road. We would drive without seeing another car for over an hour. Oftentimes it felt as though we had the country all to ourselves.

As we drove from one destination to the next and stopped off whenever curiosity got the better of us, we’d realise that we had been driving for over seven hours, although it never really felt like seven hours, not for me anyway. I was caught up in the awe of each scene that changed at every turn.

Along the Ring Road we drove through lava fields where all we could see was black ash and nothing else beyond the horizon. We drove up mountains covered with ice and snow and then saw lush fields of grass with red steeple churches. We toured black sand beaches with native birds flying overhead and seaside scapes painted with pastel colours. The natural beauty of Icelandic wilderness is both grand and haunting.

It rained for three of the four days that we were there. We would repeatedly run back to the car, drenched from rain and my camera wet. Suffice to say, my dodgy makeshift plastic shopping bag camera protector didn’t hold up well with the torrential rain and wind. Nevertheless my camera somehow survived the trip.

Whilst driving, you can see many Icelandic horses along the Ring Road. They are magnificent creatures. Interestingly, natural selection has played a part in the current Icelandic breed – many horses died from the cold harsh Icelandic climate and also starvation from volcanic eruptions covering the land in ash. Unlike traditional racing horses, Icelandic ones have shorter and stumpier legs, grow extra long hair during the winter months and can roll on their backs.

My favourite part of the trip was horse riding. Our guide told us that horses can really sense the energy of their riders so if you’re feeling anxiety about riding, the horse can feel it too, or likewise if you’re calm, the horse will be tranquil. I felt adoration as I looked upon the horse and a feeling of connectedness. I wondered if it could sense this from me.

As our trip winded down, I thought about all the incredible things I had seen and done. But what I treasured most about the trip was cruising in the car with Fleet Foxes blaring through the speakers, devouring banana chips and talking endlessly. The road trip was an excellent way to see the island and we got to do it at our own pace and in our own way. 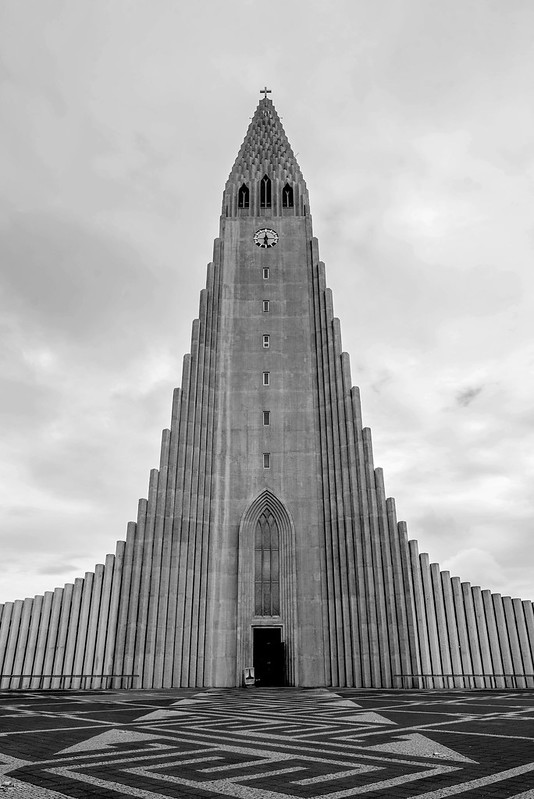 This is Hallgrímskirkja, a Lutheran church in Reykjavik. It was designed to resemble the basalt lava flows found in Iceland. 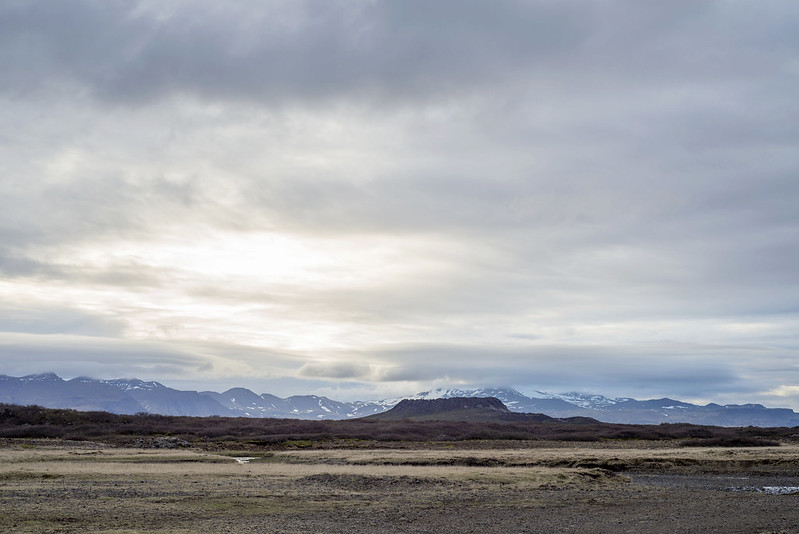 The first stop, and a 1.5 hour drive away from Reykjavik, was Eldborg crater. You can actually drive closer and hike towards the crater but we decided to give it a miss as we were pressed for time. 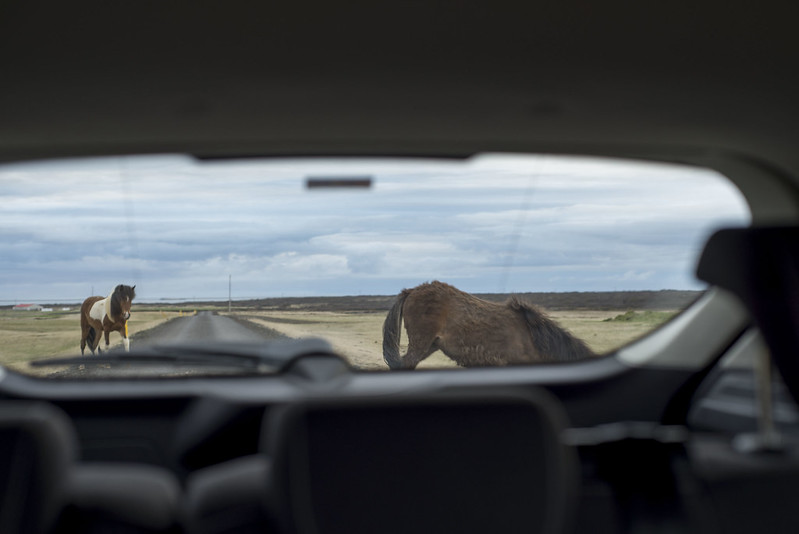 We stopped on the side of the road to photograph Eldborg and had our first brief encounter with some Icelandic horses. 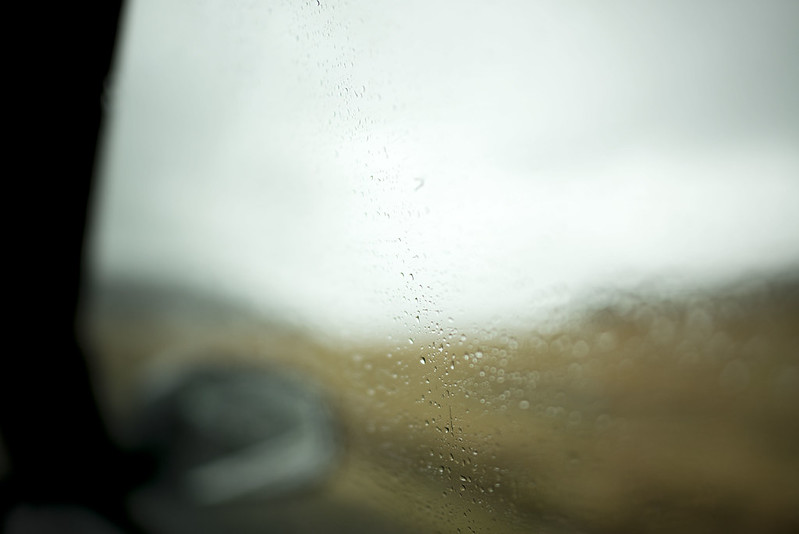 It rained for three days and we only had sunshine for one day. If you’re ever planning to head to Iceland, make sure to pack waterproof gear. I lived in my waterproof gear and fleece for the whole duration of the trip. Just a note, we headed to Iceland in late May (summer was just starting) and it was about 10 degrees. 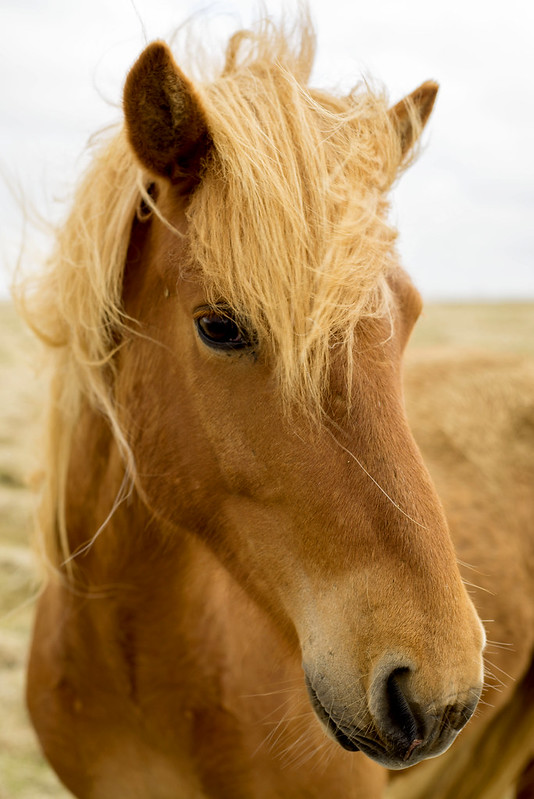 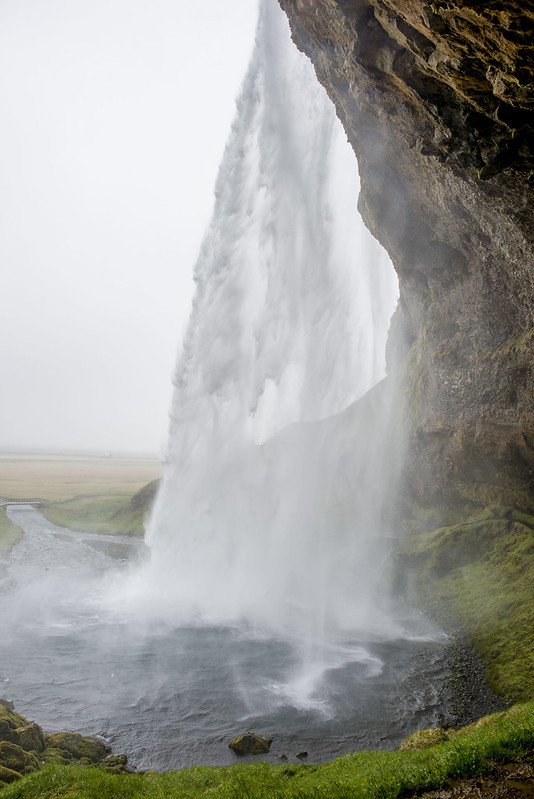 Seljalandsfoss waterfall was our first, of many, waterfalls that we visited. You can actually walk around and behind this waterfall. This shot was taken behind the waterfall. 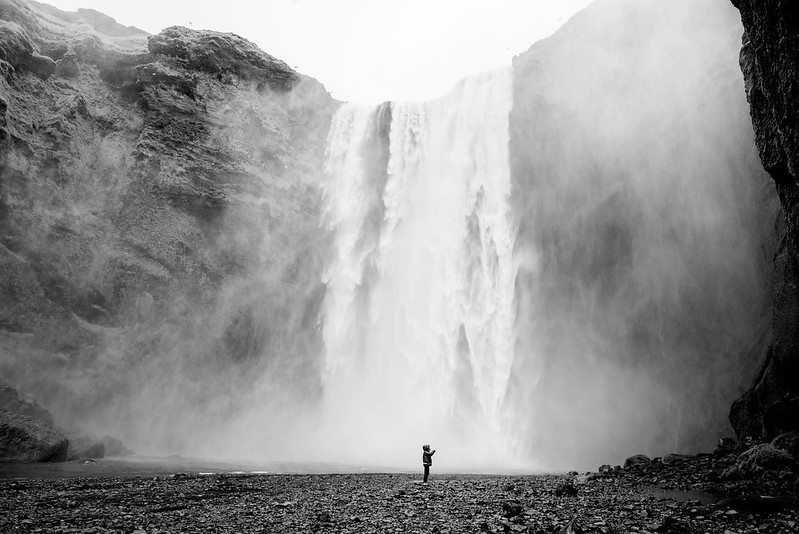 The next waterfall we visited was Skógafoss waterfall, which was close by to Seljalandsfoss. Skógafoss was a lot larger and more powerful. I like photographing landscapes with people to add perspective. 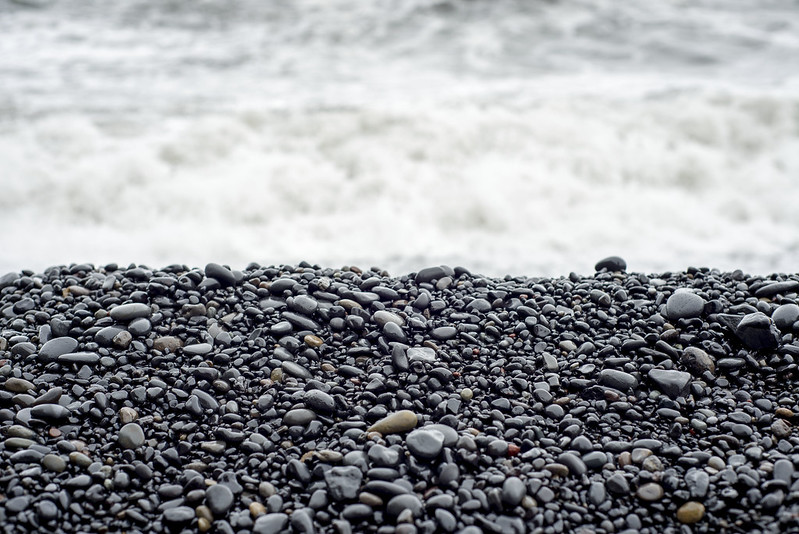 The next place we visited was a black pebble beach near the town of Vík í Mýrdal. 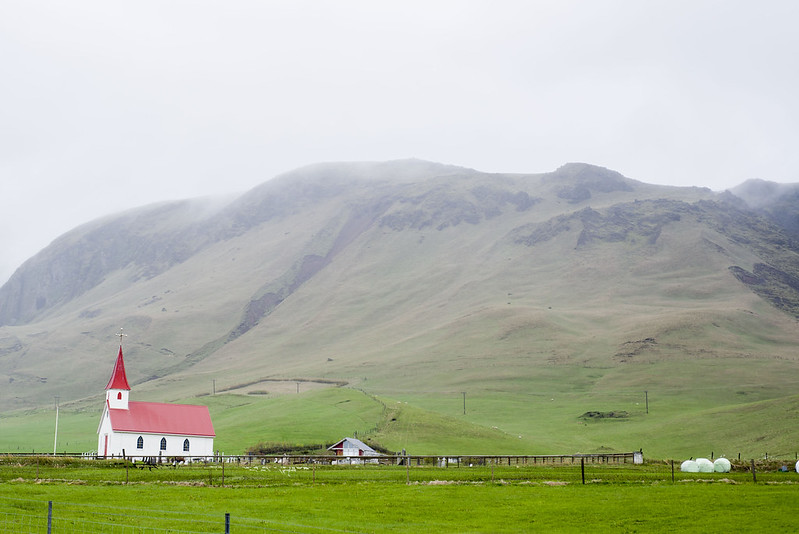 On our way out of the beach, we came across this church. You can find these churches with the pointed steeples and red roofs scattered throughout Iceland. 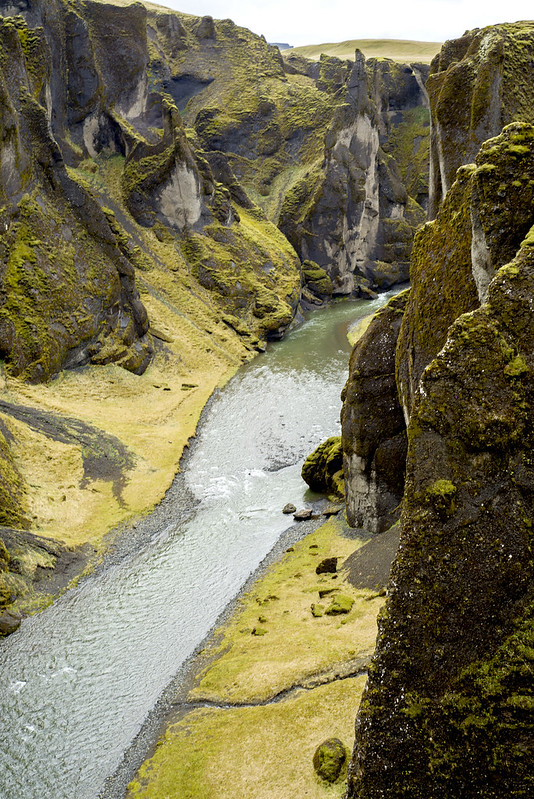 Fjaðrárgljúfur is a 2km long canyon. It is located just off the Ring Road (you have to drive through an unpaved gravel road to get there). 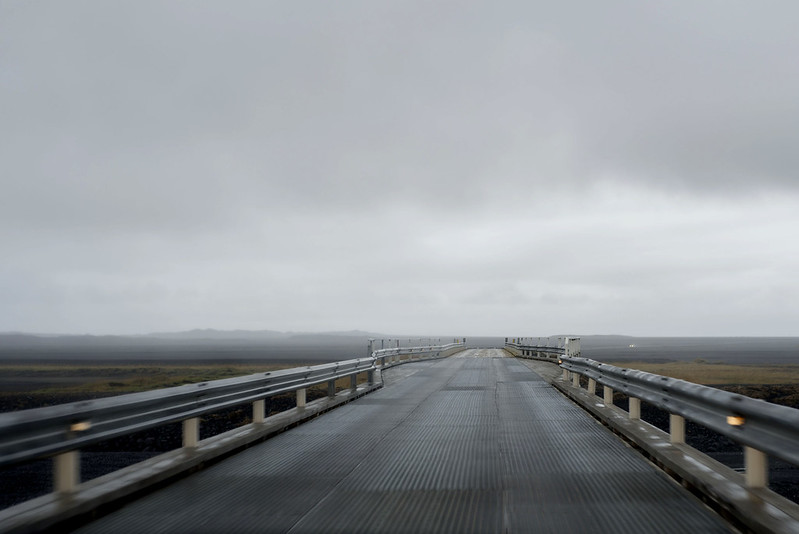 We were passing through a lava field area with the land covered in black ash. 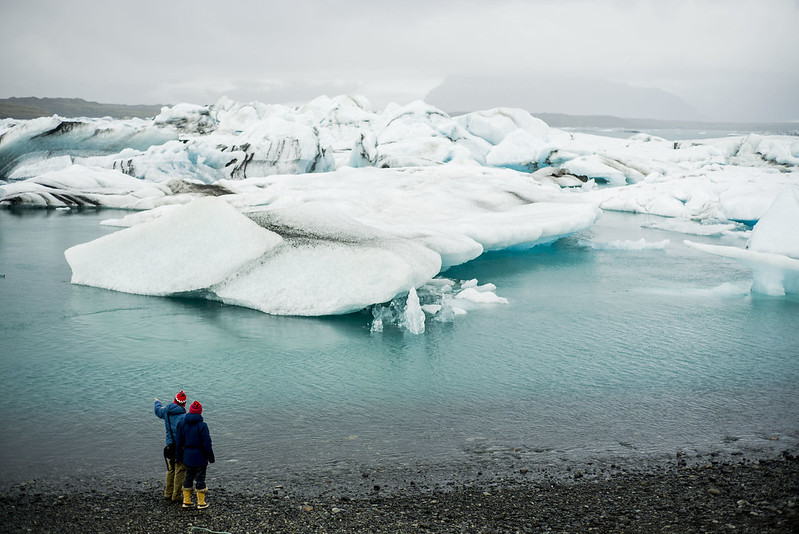 Jökulsárlón is a large glacial lake and has also been featured in films like Batman Begins. 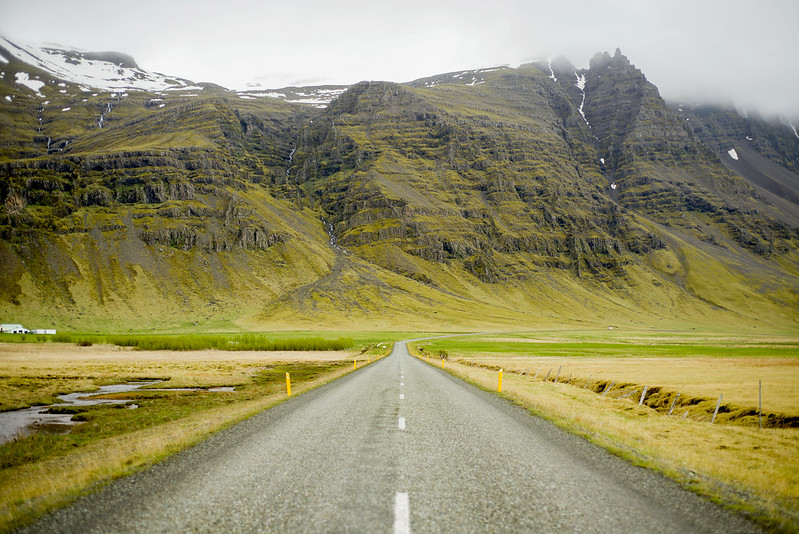 Another shot on the road featuring mountain views and grey clouds up ahead. 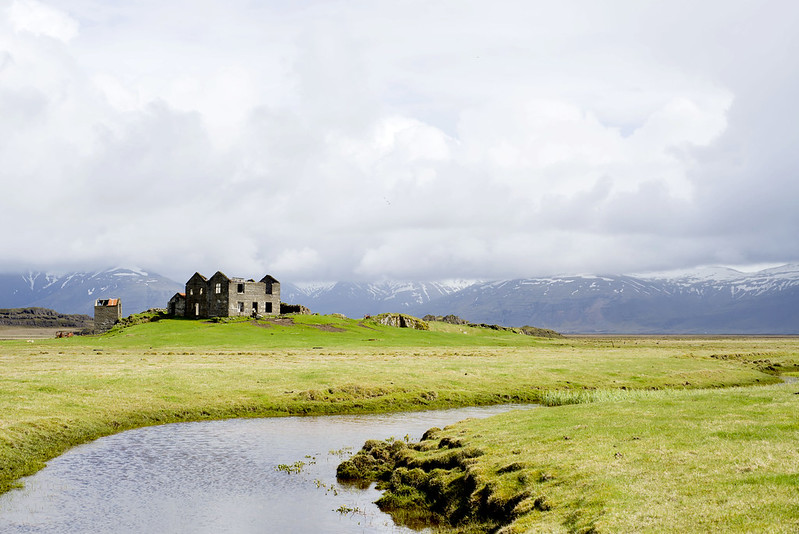 Throughout our trip, we continuously stopped off on the side of the road to take photos of landscapes and whatever interested us. When we stopped off to take this photo of a dilapidated house, three other cars followed suit as well. 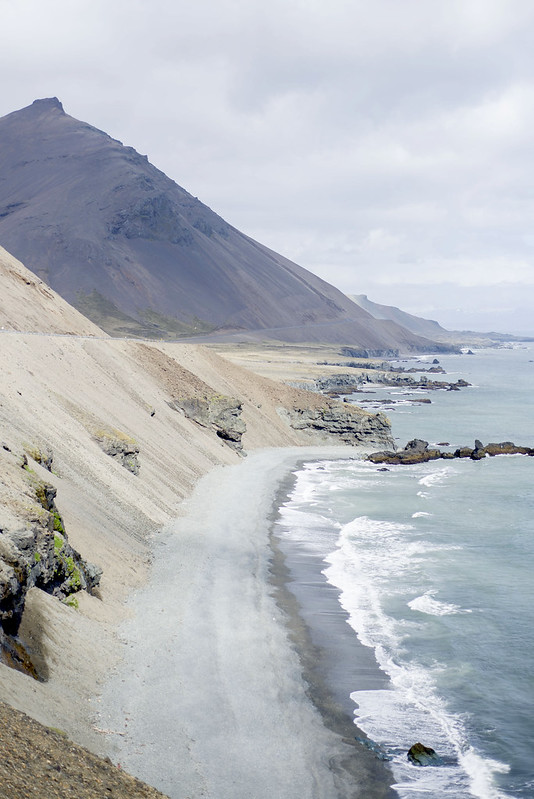 This image was taken along the south east coast of Iceland. I was awed by the pastel colours of the mountains, beach and sea. 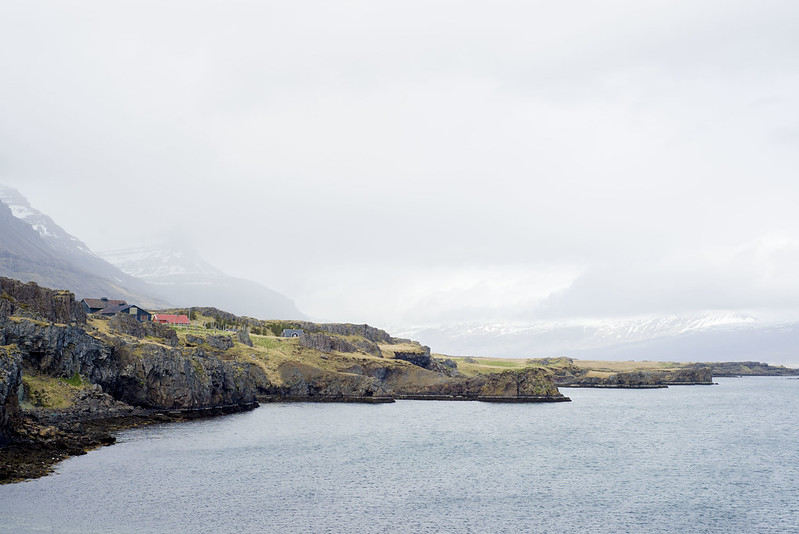 The cloud limited our views of the distance but it also brought forth interesting landscapes and shapes in the forefront. 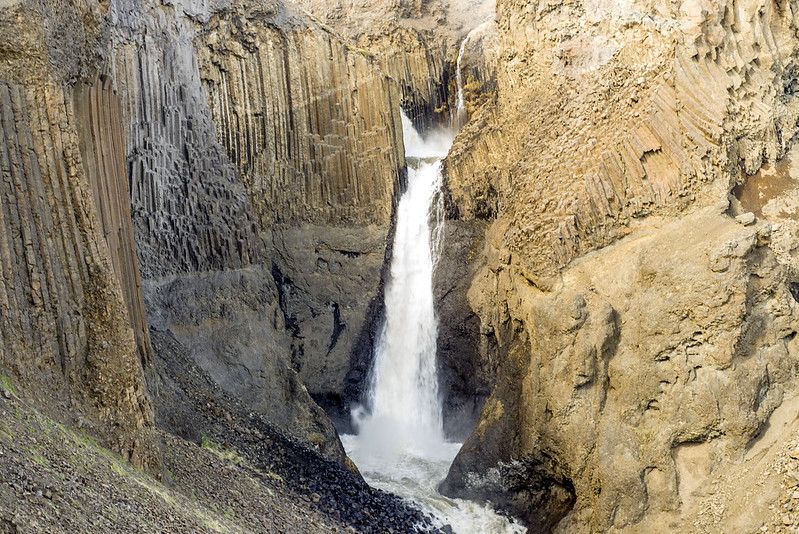 Another waterfall we visited was Litlanesfoss. We took a short hike up to reach the waterfall. 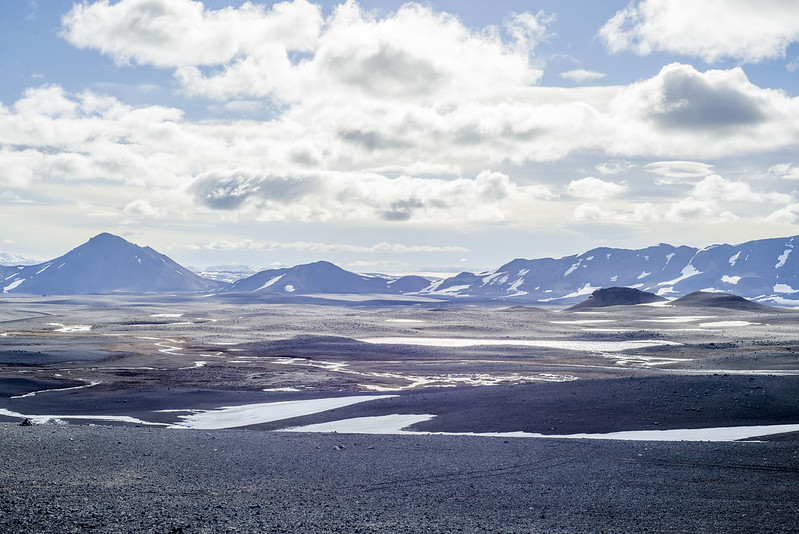 This is a lava field in East Iceland. The snow contrasted with the black lava ash. 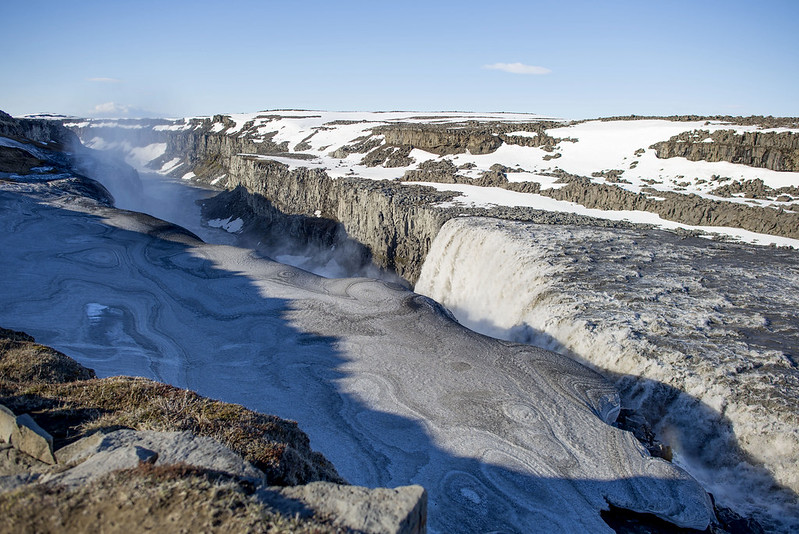 Dettifoss is one of the most powerful waterfalls in all of Europe and is also featured in the movie Prometheus. 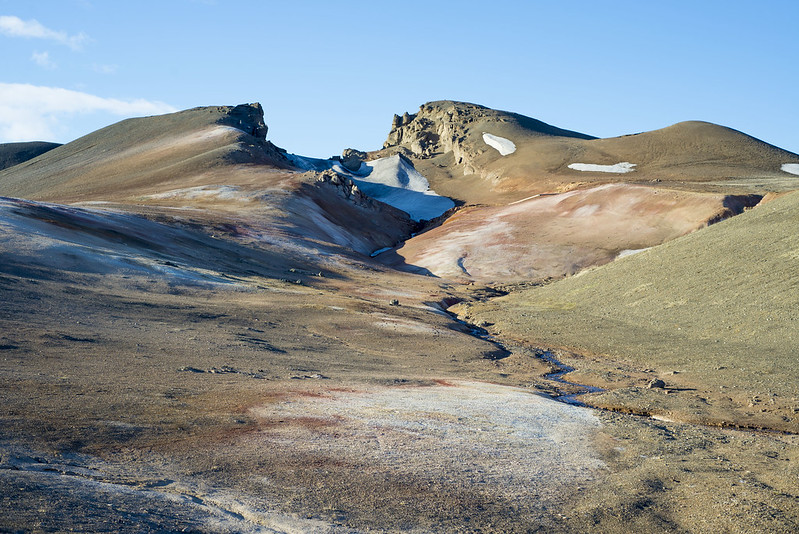 Multicoloured hill with hues of orange, green, brown and white. 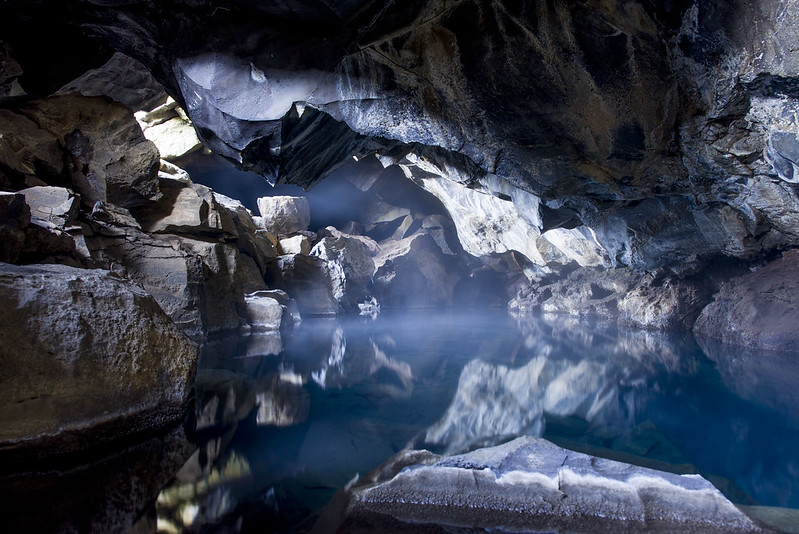 This is Grjotagja, a lava cave with a thermal spring inside where people can bathe. We touched the water and it was really hot (you can see steam in the photo). This location was also used in one of the episodes of Game of Thrones. 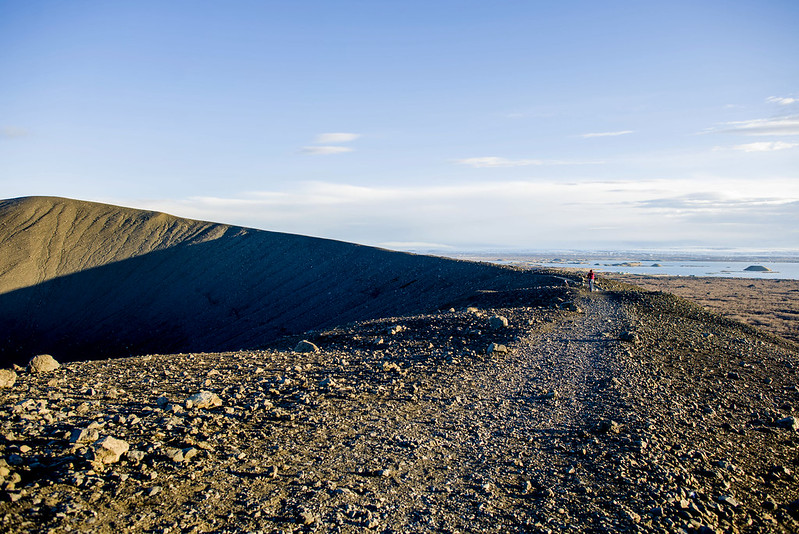 We hiked up Hverfjall volcano crater and walked around the rim. 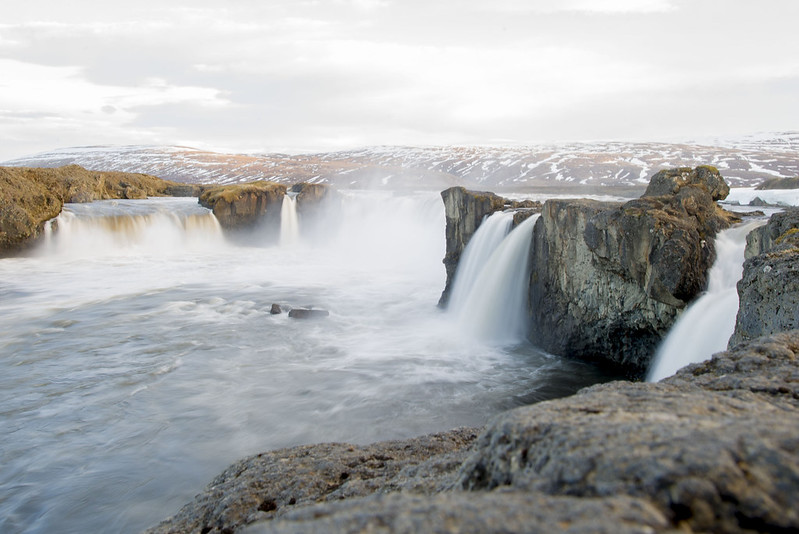 This is Godafoss waterfall, translated as waterfall for the Gods. 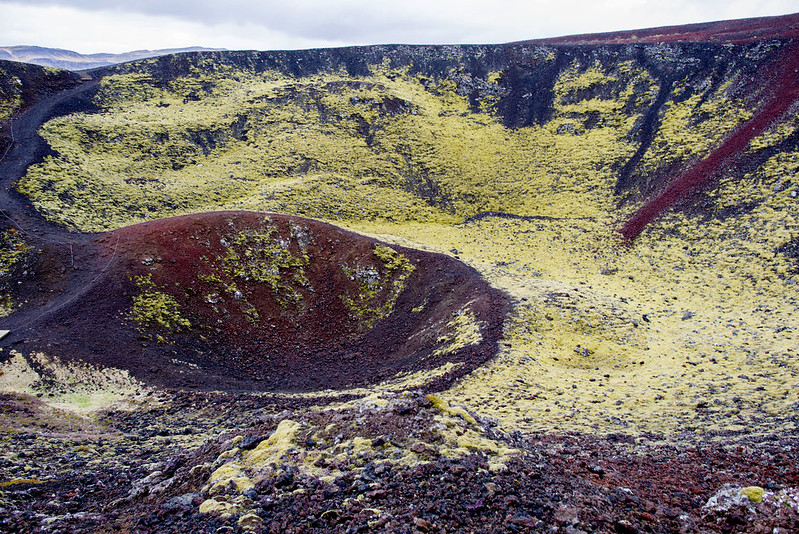 We stopped to visit a meteor crater along the Ring Road which included a short hike up to the rim of the crater. This is the view from the centre. 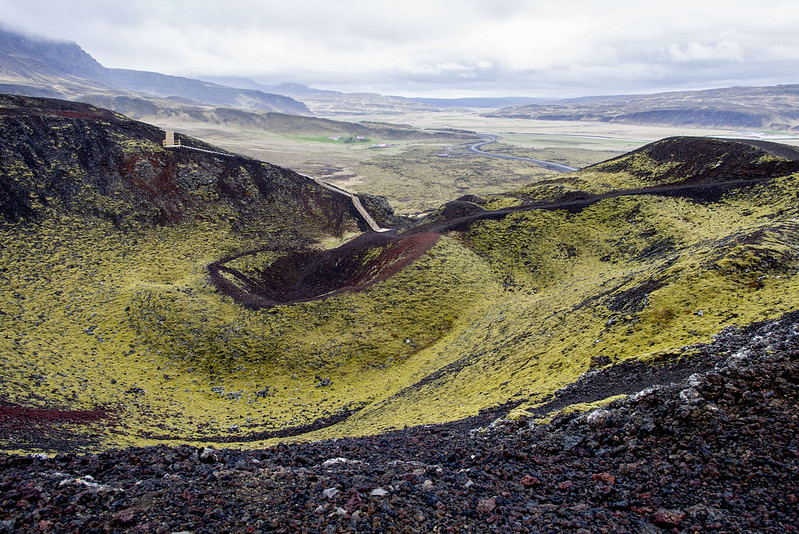 This is another view from the rim of the crater, looking out upon the Ring Road and surrounding landscape. 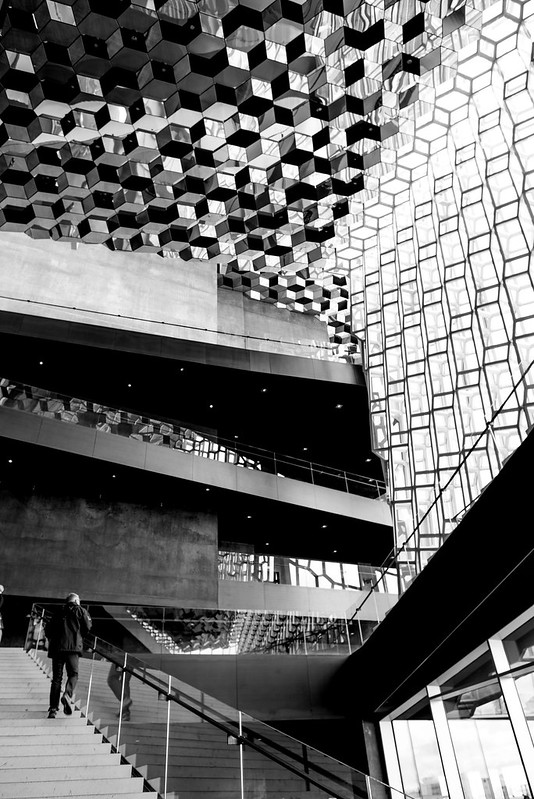 The architecture inside Harpa concert hall in Reykavik is astounding. The design won the European Union Prize for Contemporary Architecture in 2013. 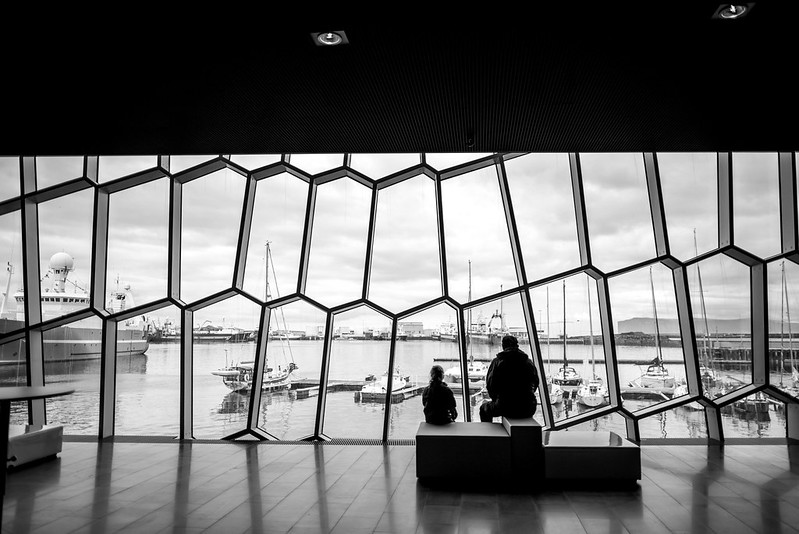 A father and daughter watching the boats at Harpa concert hall.

This article was originally published on The Photo Journal.