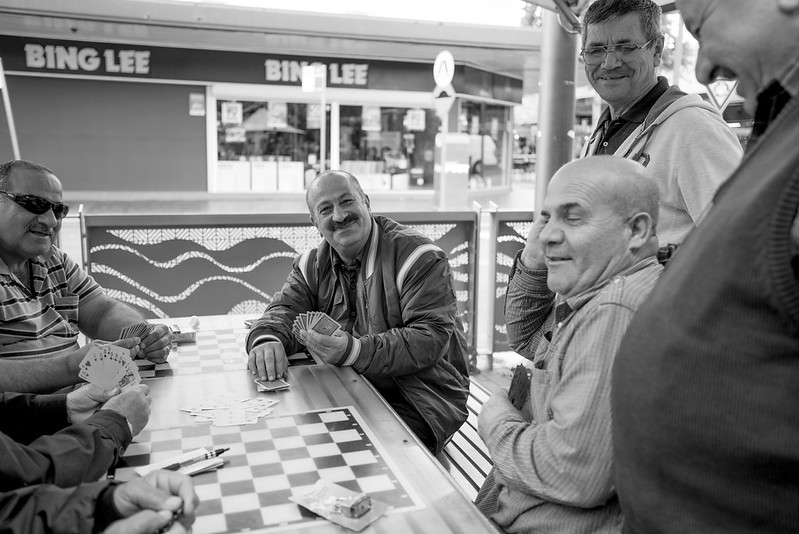 I recently went on a photo walk around Fairfield. Despite having lived here most of my life, I’ve never really walked the streets and just observed. Although street photography can be quite intrusive to most people being photographed, what I experienced was mostly kindness and curiosity from strangers.

END_OF_DOCUMENT_TOKEN_TO_BE_REPLACED

This post is long overdue but better late than never – Pie and Deena are no longer engaged but officially husband and wife now!

I was quite excited about this photo shoot as I’ve never done an engagement shoot in an urban environment and it was a great place to flex my creative muscles. I tried experimenting with odd angles and composition.

Below are some of my favourite shots from the day. This was taken at central station outside on the tram line. I must have walked through this area many times before but I never noticed how photogenic this place is – credit goes to Deena for location scouting! The country terminal building inside also had beautiful diffused lighting, great for portrait shoots.

END_OF_DOCUMENT_TOKEN_TO_BE_REPLACED

If I were to choose only one subject to photograph for the rest of my life – it would probably be people in their natural setting. I find people so visually interesting – their facial expressions that convey emotion, their movement and their dress.

On my daily commute to work I encounter so many different people, I often wonder what their story is. I’ve had thoughts about approaching strangers and asking to photograph them because I thought they looked really interesting – but I never had the guts to go through with it. I wonder if they’d take it as a compliment or be weirded out?

Two of my friends, Van and Monica, got engaged earlier this year and I was really keen to photograph them. Besides trying to use my camera every chance I get, I also thought it would be a good challenge to photograph for someone else, rather than myself.

We swapped ideas and I had a good understanding of what they might like. Some of my favourite photos, that I’ve taken in the past, is from photographing people when they didn’t know they were being photographed. I wanted to mimic that style and capture Van and Monica’s relationship in its truest form, however this proved impossible because the photography session is in essence an artificial circumstance. Can they really be themselves in an unnatural setting?

Early on in the day I had a bit of difficulty. I didn’t provide much direction because I wanted them to be as natural as possible, but at the same time I wasn’t getting any good shots – perhaps from the lack of direction from my end. I was conflicted – how am I to photograph them in their truest form when I’m telling them to pose for photos?

As the day progressed, we all became more comfortable and had more fun. I was able to provide more direction but mostly let them do their own thing – which is a good middle ground to what I wanted. Despite sweating bucket loads (still not used to the unseasonably warm winter in Sydney) and being a third wheel, I still had an awesome time photographing Van and Monica. When we finished, they even shouted me delicious charcoal chicken. Score!

Here are the photos from that day. Van and Monica are incredibly playful. Throughout the whole session they were making jokes at each other, laughing and making faces.

END_OF_DOCUMENT_TOKEN_TO_BE_REPLACED

My friend called me out a few weeks ago to test our wide angle lenses. The location was Milson’s Point – with great views of the city, Sydney Harbour Bridge, Sydney Opera house and Luna Park.

I get really bored of taking landscape shots and popular icons. Every photo looks the same, and it’s been done before.

Instead I opted to play with shutter speeds and got my friend to model for me. It took 8 shots to get this ghostly trail photo.. although I’m still not entirely happy with it.

Regardless, it was a lot more fun to get my friend to pose than take photos of the Harbour Bridge.

So I haven’t really had much time to play around with my new 24mm lens – so I try to create opportunities to use it as much as I can.

I had a quick shoot with my friend in between organising her wedding. She brought along her finance’s camera too and I taught her a few basic photography tips. It makes me happy when people want to learn and are keen to listen!

The location wasn’t too great – there were ugly steel poles everywhere and the water was really murky, but I tried to make do with what was there.

Here’s one of my friend posing for me. I like the shadow that the trees created. Looking back on it now, I wish I had composed the picture better with more emphasis on the shadow, landscape view (although the ugly poles probably would’ve been in the picture) and with my friend to the left of the frame. I had recently discovered this band called “The Antlers” – they have an eerie and haunting sound (or at least the songs that I’m obsessed with have the haunting sound). Upon discovering this awesomely sounding band, I found out that they were touring at Laneway Festival and they had a sideshow in Sydney! However, to my devastation I also found out that their sideshow was sold out. Ooooh how the gods are cruel! I was disappointed but got over it seeing as there was nothing that I could do.

A few days later I received an email from FasterLouder – an online music publication that I signed up to be a photography contributer. They said that I could cover the show. OMGGGGGGGgggg.. I was thrilled! I couldn’t understand how I got the gig though because I don’t remember applying for it. It turns out that I did apply quite a while to cover the Laneway sideshows, before even learning of The Antlers.

One word to describe their gig – EPIC. Or from the mouth of my boyfriend.. “PERFECT”. If you think their recordings are good, their live performances are 1 million x better!

I think the only downside was that since I was so focused on taking photos, I couldn’t give all my attention to their performance. I think that’s one of the major pitfalls with photography.. sometimes you’re just so focused on taking an awesome picture, that you miss out on the awesome experience yourself. Regardless, that’s not going to stop me from ninja-ing as many shots as possible.

One of my fav songs from their Hospice album.

I’ve had my camera for about five months now and I’ve had a few practice shoots with a few of my friends. At the beginning I wasn’t sure what I was doing. They wanted direction and I really didn’t know what to tell them. They would ask what to do, and I’d say: ‘Do whatever’ and just shoot if I felt that it looked interesting. After my first shoot, which quickly moved on to my second, I got the hang of giving a few pointers, where they should position themselves, which way to face to take advantage of the best lighting, suggestion for poses and so forth. Experience comes with practice and I am learning with every shoot. I’ve noticed that most of the time my friends don’t want to look into the camera because they feel it doesn’t look “model-y”. I disagree, sometimes looking into the camera makes the photo more intense. For example, the above photo that I took of a friend. She is looking right into the camera and you focus on her eyes. It creates the sense that she’s looking right at you, as though she is right in front of you.